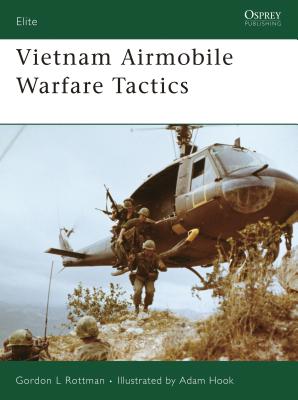 By Gordon L. Rottman, Adam Hook (Illustrator)
$20.00
Special Order - may be out of print

This is book number 154 in the Elite series.

• With its first major use in battle during the Vietnam War, the helicopter ushered in a radically different way of fighting, despite its proven vulnerability to ground fire. Either delivering troops into hostile territory and removing them after the fighting ended, or armed with guns, grenade launchers, and rockets to provide rapid and wide-ranging air to ground support fire, the helicopter - available for the first time in sufficient numbers and capable of a wide range of missions - played a central role in the war.

• From the beginning, with obsolete Korean War helicopters carrying ARVN troops into battle, to Huey gunships evacuating the wounded at la Drang in 1965, and transport helicopters evacuating Americans from Saigon rooftops in 1975; this was the first real helicopter war. By the middle of the war, the helicopter, in particular the Huey model had become as important to the army as the tank, the armored personnel carrier, and the jeep.

• Presenting a concise history of the first ever major use of helicopters in battle, Gordon L. Rottman, a former Green Beret in Vietnam, describes in detail the development of the critical airmobile tactics that ultimately changed the way America fights its battles.

“Overall, this is a great book to add to your reference collection. I highly recommend it to modelers or history buffs interested in the Vietnam War.” —Gino P. Quintiliani, AeroScale (April 2007)

This feature require that you enable JavaScript in your browser.
END_OF_DOCUMENT_TOKEN_TO_BE_REPLACED

This feature require that you enable JavaScript in your browser.
END_OF_DOCUMENT_TOKEN_TO_BE_REPLACED

This feature require that you enable JavaScript in your browser.
END_OF_DOCUMENT_TOKEN_TO_BE_REPLACED