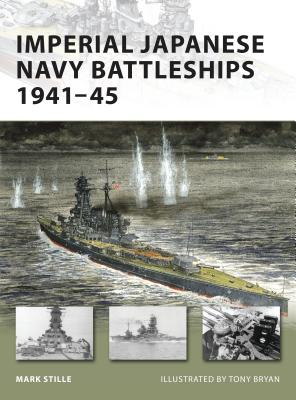 This is book number 146 in the New Vanguard series.

The Imperial Japanese Navy of World War 2 surpassed the Allied and Axis fleets in innovation and technology. This title covers the 12 Japanese battleships that saw service between 1941-45. Each class is considered in turn in light of its design and construction, its armament and wartime modifications. The author, Mark Stille, also uses first-hand accounts and dramatic photographs to tell the story of these mighty battleships at war, including major engagements during the raid at Pearl Harbor and the battle of Midway. He also examines the wider context of Japanese battleship development by looking at the naval strategy and cult of the battleship. This title will fascinate any naval enthusiast, and the detailed color plates will make it essential for modelers of the period.

“Mark Stille's Imperial Japanese Navy Battleships 1941-45 covers the twelve big Japanese battleships that saw service during World War II. The author's use of primary sources and dramatic photos provides a visual survey of the ships: in fact all the coverage are powerful in original resources and vintage illustrations.” —The California Bookwatch (October 2008)

“...looking at the color plates for each class, including some cutaways, I imagine that this book would be a great resource for modelers. The single-page appendix on the paint schemes of Japanese WW2-era battleships would likely be a great niche reference.” —C. Peter Chen, World War II Database (August 2008)

“An excellent book on a most interesting subject and one that I am positive you will find to be of interest. One that will be pulled from the shelves time after time and one I can highly recommend to you.” —Scott Van Aken, modelingmadness.com (July 2008)

This feature require that you enable JavaScript in your browser.
END_OF_DOCUMENT_TOKEN_TO_BE_REPLACED

This feature require that you enable JavaScript in your browser.
END_OF_DOCUMENT_TOKEN_TO_BE_REPLACED

This feature require that you enable JavaScript in your browser.
END_OF_DOCUMENT_TOKEN_TO_BE_REPLACED