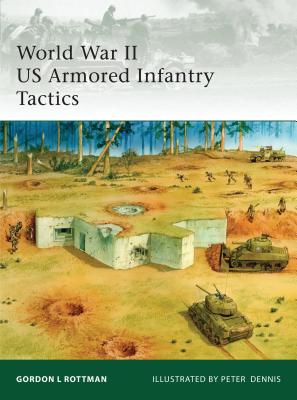 This is book number 176 in the Elite series.

Osprey's study of America's armored infantry tactics in World War II (1939-1945). Little has been published on US armored infantry units and tactics over the years despite their key role in World War II. There were a total of 57 armored infantry battalions and two regiments that served throughout the war and in all theaters. Equipped with halftracks, they fought as part of combined arms teams and combat commands alongside tanks, tank destroyers and artillery battalions. Significantly, they were not simply standard infantry battalions provided with halftracks. Their company and platoon organization was very different from the standard infantry unit and these highly mobile, heavily armed battalions fought in an entirely different manner. Using period training manuals and combat reports this book provides an exclusive look at the unique tactics developed by US armored infantry units including movement formations and battle drills.

“Author Gordon L. Rottman covers the organization of these units, the weapons and equipment they used as well as what tactics, theory and capabilities were developed as these units were used in combat. Then there was the understanding and exploitation of the strengths and weaknesses of these units and how they performed in action. Bolstered by a well done selection of period photographs and the superb artwork of Peter Dennis, it makes into an excellent book on the subject. One in which I learned a lot and can easily recommend to you.” —Scott Van Aken, Modeling Madness, modelingmadness.com (November 2009)

“A solid pick for such [military history] collections... Gordon Rottman's World War II US Armored Infantry Tactics, telling of lessons applied between divisions when the nation entered the war and underestimated the ratio of mechanized infantry to tanks.” —The Bookwatch (January 2010)

This feature require that you enable JavaScript in your browser.
END_OF_DOCUMENT_TOKEN_TO_BE_REPLACED

This feature require that you enable JavaScript in your browser.
END_OF_DOCUMENT_TOKEN_TO_BE_REPLACED

This feature require that you enable JavaScript in your browser.
END_OF_DOCUMENT_TOKEN_TO_BE_REPLACED