1809 Thunder on the Danube, Volume III: Napoleon's Defeat of the Habsburgs: Wagram and Znaim (Hardcover) 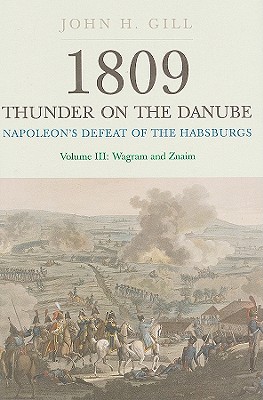 In this third volume John H. Gill brings to a close his magisterial study of the 1809 war between Napoleonic France and Habsburg Austria. This final volume begins with the principal armies of both antagonists recuperating on the Danube's banks. As they prepared for the next encounter, important actions were taking place in distant theaters of war: Eugene brought his army into Hungary and won a crucial victory over Johann on the anniversary of Marengo, Prince Poniatowski's Poles outflanked another Austrian archduke along the Vistula, and future marshal Marmont drove an Austrian force out of Dalmatia to join Napoleon at Vienna. These subsidiary campaigns all set the stage for the clash that would decide the war: the titanic Battle of Wagram. Second only in scale to the three-day slaughter at Leipzig in 1813, Wagram saw more than 320,000 men and 900 guns locked in two days of fury that ended with Austrian retreat. The defeat, however, was not entirely complete and Napoleon had to force yet another major engagement on the Austrians before Charles would accept a ceasefire. This under-appreciated battle at Znaim introduced an extended armistice that finally ended with a peace treaty signed in Vienna in October. Gill makes use of an impressive array of sources to present a lively account that covers the conflict from the diplomacy of emperors to the common soldiers suffering the privations of campaigning and the horrors of battle as they attempt to carry out their duties. Enriched with uncommon illustrations, more than 40 specially prepared maps, and extraordinary order of battle detail, this work concludes an unprecedented English language study of Napoleon's last victorious war.

This feature require that you enable JavaScript in your browser.
END_OF_DOCUMENT_TOKEN_TO_BE_REPLACED

This feature require that you enable JavaScript in your browser.
END_OF_DOCUMENT_TOKEN_TO_BE_REPLACED

This feature require that you enable JavaScript in your browser.
END_OF_DOCUMENT_TOKEN_TO_BE_REPLACED