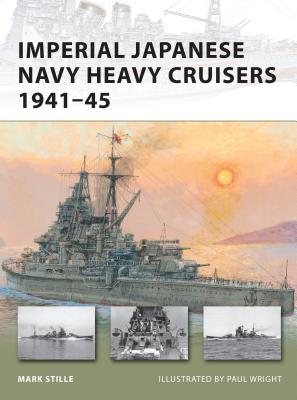 This is book number 176 in the New Vanguard series.

Designed with little more than a passing nod to the international naval treaties of the inter-war period, the Imperial Japanese Navy's heavy cruisers were fast and heavily armed. Like the other vessels of the Japanese Navy, the heavy cruisers were technologically superior to and far more innovative than their Allied rivals, whom they met in many of the major Pacific Theater battles, including Midway and Leyte Gulf. Mark Stille continues his study of the IJN of WWII with this fascinating topic, addressing the design and development of all 18 ships in the six heavy cruiser classes, from pre-war construction and mid-war alterations, their operational histories and eventual fates.

Mark Stille (Commander, United States Navy, retired) received his BA in History from the University of Maryland and also holds an MA from the Naval War College. He recently concluded a nearly 40-year career in the intelligence community, including tours on the faculty of the Naval War College, on the Joint Staff and on US Navy ships. He is the author of numerous Osprey titles focusing on naval history in the Pacific.

“A great deal of information has been packed between these covers, and with this latest New Vanguard edition, Osprey has produced one of the most comprehensive guides possible within its short 48 pages. Highly recommended.” —Bill Kluge, IPMS/USA

This feature require that you enable JavaScript in your browser.
END_OF_DOCUMENT_TOKEN_TO_BE_REPLACED

This feature require that you enable JavaScript in your browser.
END_OF_DOCUMENT_TOKEN_TO_BE_REPLACED

This feature require that you enable JavaScript in your browser.
END_OF_DOCUMENT_TOKEN_TO_BE_REPLACED