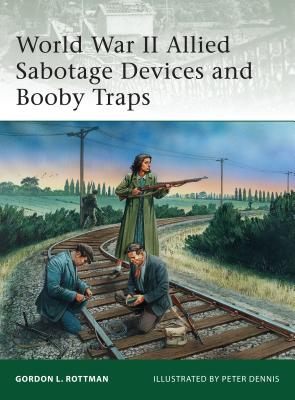 This is book number 184 in the Elite series.

Osprey's elite title dealing with various sabotage devices and booby traps that were used by the British and the Americans during World War II (1939-1945). Following Churchill's directive to set occupied Europe ablaze, the SOE and later its American sister organization, the OSS, were deployed across the continent. Outnumbered, surrounded and in great peril, these brave agents were armed with a wide variety of devices to help them achieve their objectives, including numerous pieces of sabotage equipment and cunning booby traps.

This book examines these different pieces of equipment and the technicalities involved in deploying them effectively. It also discusses the specialist equipment developed by Special Forces units, including the SAS Lewes Bomb. Touching on some of the stranger developments, such as explosives disguised as lumps of coal, the author goes on to describe the German clearance techniques that were developed to avoid these dangers.

Complete with specially commissioned artwork and period diagrams, together with detailed descriptions of the dangerous missions of Allied agents, this book is a fascinating insight into the secret war behind enemy lines.

This feature require that you enable JavaScript in your browser.
END_OF_DOCUMENT_TOKEN_TO_BE_REPLACED

This feature require that you enable JavaScript in your browser.
END_OF_DOCUMENT_TOKEN_TO_BE_REPLACED

This feature require that you enable JavaScript in your browser.
END_OF_DOCUMENT_TOKEN_TO_BE_REPLACED