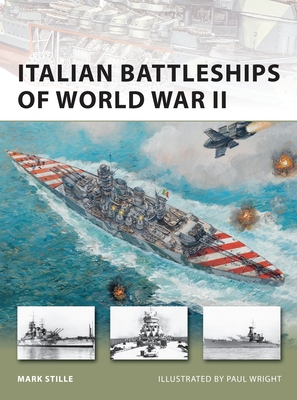 This is book number 182 in the New Vanguard series.

Often overlooked as a naval power of WWII, Italy's Regia Marina was, upon the declaration of war against France, the fourth largest navy in the world. Despite its numbers, the Italian fleet was made up of largely obsolete vessels, none being equipped with radar, and had a reputation for having inadequately-trained crews. Added to these drawbacks, the Italian commanders did not enjoy the discretion of command at sea that their counterparts in the service of other nations did, being directed closely by the Supermarina (Italian Naval Headquarters). Despite these obstacles, and the heavy losses inflicted upon the fleet by the Royal Navy while in harbour at Taranto, the battleships of the Italian Navy enjoyed a good reputation for being well-designed, and served with courage and determination at Punto Stilo/Calabria, Sirte, Cape Spartivento, and Cape Matapan. Mark Stille details, with the aid of many stunning photographs, including several from the Italian Navy's own archives, the battleships of one of the forgotten navies of WWII.

Mark Stille is the author of numerous Osprey titles focusing on naval history in the Pacific. He recently concluded a nearly 40-year career in the intelligence community, including tours on the faculty of the Naval War College, on the Joint Staff and on US Navy ships. He received his BA in History from the University of Maryland and also holds an MA from the Naval War College.

“The seven battleships of the Regia Marina that served in World War II enjoyed reputations superior to the Italian fleet as a whole ... This well-illustrated monograph gives the reader a thorough technical and operational look at the ships.” —Richard D. Burgess, Seapower (December 2011)

“...an excellent primer for those interested in learning about Italian battleships of World War Two.” —Luke R. Bucci, IPMS/USA

This feature require that you enable JavaScript in your browser.
END_OF_DOCUMENT_TOKEN_TO_BE_REPLACED

This feature require that you enable JavaScript in your browser.
END_OF_DOCUMENT_TOKEN_TO_BE_REPLACED

This feature require that you enable JavaScript in your browser.
END_OF_DOCUMENT_TOKEN_TO_BE_REPLACED