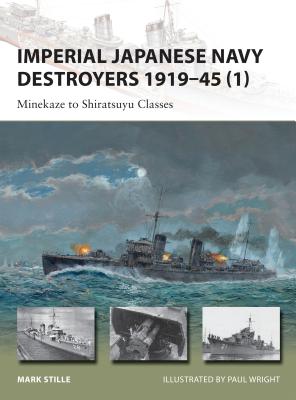 This is book number 198 in the New Vanguard series.

During the Pacific War, arguably the most successful component of the Imperial Japanese Fleet was its destroyer force. These ships were generally larger than their Allied counterparts and were better armed in most cases. Armed with a large, long-range torpedo (eventually called Long Lance by the Allies), these ships proved themselves as formidable opponents. In the first part of the war, Japanese destroyers were instrumental in an unbroken string of Japanese victories. However, it was not until the Guadalcanal campaign that these ships fully demonstrated their power. In a series of night actions, these ships devastated Allied task forces with a number of daring night attacks using their deadly torpedoes.

This volume will detail the history, weapons and tactics of the Japanese destroyers built before the war. This includes the famous Fubuki class (called "Special Type" by the Japanese, which were, when completed in the late 1920's, the most powerful class of destroyers in the world. This design forced all other major navies to follow suite and provided the basic design for the next many classes of Imperial Navy destroyers. This book will also cover the three classes built before the Special Type which were based on a German World War I design as well as two classes built after the advent of the Special Type. All of these ships had a rich history as they fought from the first battles of the Pacific War up until the very end when several accompanied the superbattleship Yamato on her death sortie.

The final part of the book will be an analysis of the destroyer designs covered in the book which will include an examination of their strengths and weaknesses. The success (or lack of success) of these designs will be discussed and they will be compared to comparable Allied destroyer designs.

“This book covers the various classes from Minikaze through Shiratsuyu and include the Kamikaze, Mitsuk, Fubuki, Akatsuke, and Hatsuharu builds. Each ship class is described and a brief history of each ship in the class is provided, including its eventual fate. This is further enhanced by at least one well done photo of each class as well as the art work of Paul Wright showing some of these ships in action. It all makes for an excellent primer on these ships and is a book that every nautical enthusiast has to have on their shelves. Most highly recommended.” —Scott Van Aken, Modeling Madness (April 2013)

This feature require that you enable JavaScript in your browser.
END_OF_DOCUMENT_TOKEN_TO_BE_REPLACED

This feature require that you enable JavaScript in your browser.
END_OF_DOCUMENT_TOKEN_TO_BE_REPLACED

This feature require that you enable JavaScript in your browser.
END_OF_DOCUMENT_TOKEN_TO_BE_REPLACED