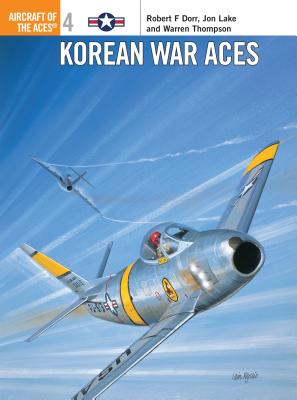 By Robert F. Dorr, Chris Davey (Illustrator)
$24.00
Special Order - may be out of print

The first virtually all-jet war, the conflict in Korea saw F-86 Sabres of the USAF take on MiG-15s of the North Korean and Chinese air forces. Although the Allied pilots were initially taken aback by the ability of the communist fighter in combat, sound training and skilful leadership soon enabled Sabre pilots to dominate the dogfights over the Yalu River. In all 39 F-86 pilots achieved ace status, and a number of these are profiled in this volume, as are notable pilots from the US Navy, Marine Corps and Royal Navy and, for the first time, the handful of MiG-15 aces.

Robert F Dorr is a well respected author of long-standing reputation - he has written over a dozen books for Osprey over the years. His histories on modern American combat aircraft like the F-101 Voodoo and A-6 Intruder have set the standard for works of this type. His ability to combine 'crew speak' with concise editorial comment gives his books a unique and revealing style of their own. Warren Thompson has written three books on the Korean War for Osprey in the past, including the best-selling Korean War Aces in the Aircraft of the Aces series. He is also an official historian of the P-61 aircrew association.

This feature require that you enable JavaScript in your browser.
END_OF_DOCUMENT_TOKEN_TO_BE_REPLACED

This feature require that you enable JavaScript in your browser.
END_OF_DOCUMENT_TOKEN_TO_BE_REPLACED

This feature require that you enable JavaScript in your browser.
END_OF_DOCUMENT_TOKEN_TO_BE_REPLACED