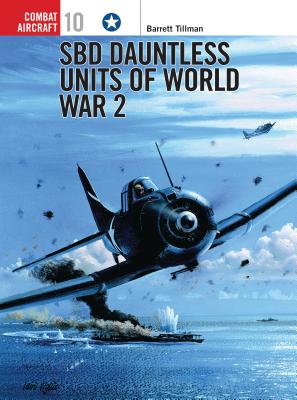 This is book number 10 in the Combat Aircraft series.

Unquestionably the most successful dive-bomber ever to see frontline service with any air arm, the Douglas SBD Dauntless was the scourge of the Japanese Imperial Fleet in the crucial years of the Pacific War of World War II (1939-1945). The revolutionary all-metal stressed-skin design of the SBD exhibited airframe strength that made it an ideal dive-bomber, its broad wing, with horizontal centre section and sharply tapered outer panels with dihedral, boasting perforated split flaps that doubled as dive brakes during the steep bombing attacks

Barrett Tillman is a professional author and speaker with more than 40 nonfiction books as well as novels to his credit. His first book, published in 1976, remains in print today as do most of his subsequent titles.
He holds seven awards for history and literature including the 1996 Tailhook Association Lifetime Achievement Award and third place in the US Naval Institute Prize in 2009. Tillman has appeared in more than a dozen documentaries including The History Channel's Dogfights.

"The impact of the battles the Dauntless participated is hard to calculate, but author Tillman brings forth many interesting facts, in particular that the statistic that the few SBD crews that served in the Pacific at the start of the war, patrolling the largest geographical area of any air unit in the world. Arguably, they had the greatest impact on their theater of war, participating in so many turning point battles, and flying to victory. For anyone interested in the history of the Dauntless and its crews, this book will have much to offer, for first time readers, and seasoned historians alike." -www.pacificwrecks.com

This feature require that you enable JavaScript in your browser.
END_OF_DOCUMENT_TOKEN_TO_BE_REPLACED

This feature require that you enable JavaScript in your browser.
END_OF_DOCUMENT_TOKEN_TO_BE_REPLACED

This feature require that you enable JavaScript in your browser.
END_OF_DOCUMENT_TOKEN_TO_BE_REPLACED