Walking the Woods and the Water: In Patrick Leigh Fermor's footsteps from the Hook of Holland to the Golden Horn (Paperback) 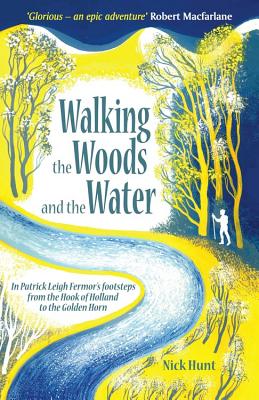 In 1933, the eighteen year old Patrick Leigh Fermor set out in a pair of hobnailed boots to chance and charm his way across Europe, like a tramp, a pilgrim or a wandering scholar. The books he later wrote about this walk, A Time of Gifts, Between the Woods and the Water, and the posthumous The Broken Road are a half-remembered, half-reimagined journey through cultures now extinct, landscapes irrevocably altered by the traumas of the twentieth century. Aged eighteen, Nick Hunt read A Time of Gifts and dreamed of following in Fermor's footsteps.

In 2011 he began his own great trudge - on foot all the way to Istanbul. He walked across Europe through eight countries, following two major rivers and crossing three mountain ranges. Using Fermor's books as his only travel guide, he trekked some 2,500 miles through Holland, Germany, Austria, Slovakia, Hungary, Romania, Bulgaria and Turkey. His aim? To have an old-fashioned adventure. To slow down and linger in a world where we pass by so much, so fast. To discover for himself what remained of hospitality, kindness to strangers, freedom, wildness, adventure, the mysterious, the unknown, the deeper currents of myth and story that still flow beneath Europe's surface.

Nick Hunt has walked and written across much of Europe. His articles have appeared in the Economist, the Guardian and other publications, and he also works as a storyteller and co-editor for the Dark Mountain Project. His first book Walking the Woods and the Water (Nicholas Brealey, 2014) was a finalist for the Stanford Dolman Travel book of the Year. He currently lives in Bristol.

With Walking the Woods and the Water, Mr. Hunt has created an illuminating addition to what the travel writer Robert Macfarlane calls 'the literature of the leg'. The shepherds and the fishermen are long gone, but Mr. Hunt controls his nostalgia and avoids mimicking Leigh Fermor's flamboyant style. Still, his inspiration rubs off, like the skin on Mr. Hunt's feet.
—Wall Street Journal, -

A brave achievement. Hunt's admiration for his celebrated predecessor is clear, and his curiosity is compelling.
—The Anglo-Hellenic Review, -

A most enjoyable read and a worthy tribute to the originals.
—The Bookseller, -

Although I've read both Nick's book and Leigh Fermor's I have to say, I enjoyed Nick's much more. Nick writes more like a contemporary travel-writer where personal experience and anecdotes take priority. Nick's book is much more accessible, while also inspiring a sense of wonder in his readers at his fantastic feat of walking such a great distance with so little in the way of resources. While the style of writing may be different, the adventurous and resourceful spirit is the same, and for modern readers, Nick's book will I think be more enjoyable than Leigh Fermor's.
—A Common Reader, -

An effective, no, beautiful accompaniment to Fermor's own books.
—Booklist, Starred review, -

Walking in the footsteps of Patrick Leigh Fermor from Rotterdam to Constantinople, Nick Hunt found that, 78 years later, everything and nothing has changed.
—Daily Telegraph interview with author, -

In his 2,500-mile journey, which took him through eight countries, he nearly froze to death and he had had innumerable encounters with the kindness of strangers. Hunt's narrative mixes description elegantly with reportage.
—New Statesman, -

Nick Hunt has written a glorious book, rich with insight and wit, about walking his way both across and into contemporary Europe. He set out as an homage to Patrick Leigh Fermor's legendary tramp across Europe in the early 1930s, but his journey became - of course - an epic adventure in its own right. A book about gifts, modernity, endurance and landscape, it represents a fine addition to the literature of the leg.
—Robert Macfarlane, author of The Wild Places and The Old Ways: A Journey on Foot, -

This moving and profoundly honest book sometimes brings a sense of unlimited freedom, sometimes joy, sometimes an extraordinary, dream-like dislocation: always accompanied by a dazzling sharpness of hearing and vision. I see now how that youthful walk informed so much of Paddy's style. Before setting out Hunt was going to write to Paddy. The letter was never written, and by the time he set off, Paddy was dead. How touched and fascinated he would have been to read this book.
—Artemis Cooper, author of Patrick Leigh Fermor: An Adventure and co-editor The Broken Road, -

With Walking the Woods and the Water, Hunt succeeds in honoring his predecessor. With elegant language, he describes the landscape, the people and culture, and his own perspective, offering an exquisite picture of his walk. Travelers and hikers will feel the itch to move when reading his gorgeous prose.
—Foreword Reviews, -

Hunt went in search of a good old-fashioned adventure and his vivid off-the-beaten-track encounters are coupled with personal anecdotes and an indomitable spirit.
—Geographical, -

This feature require that you enable JavaScript in your browser.
END_OF_DOCUMENT_TOKEN_TO_BE_REPLACED

This feature require that you enable JavaScript in your browser.
END_OF_DOCUMENT_TOKEN_TO_BE_REPLACED

This feature require that you enable JavaScript in your browser.
END_OF_DOCUMENT_TOKEN_TO_BE_REPLACED