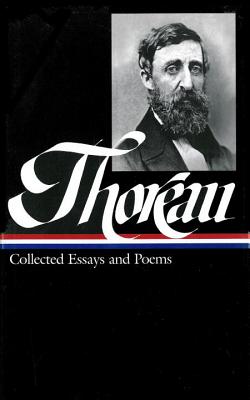 This is book number 2 in the Library of America Henry David Thoreau Edition series.

America’s greatest nature writer and a political thinker of international renown, Henry David Thoreau crafted essays that reflect his speculative and probing cast of mind. In his poems, he gave voice to his private sentiments and spiritual aspirations in the plain style of New England speech. The Library of America now brings together these indispensable works in one authoritative volume.

Spanning his entire career, the twenty-seven essays gathered here chart the range of Thoreau’s interests and the evolution of his thinking, particularly on nature and politics. They vary in style from the ambling rhythm of “Natural History of Massachusetts” and “A Winter Walk” to the concentrated moral outrage of “Slavery in Massachusetts” and “A Plea for Captain John Brown.” Included are “Civil Disobedience,” Thoreau’s great exploration of the conflict between individual conscience and state power that continues to influence political thinkers and activists; “Walking,” a meditation on “wildness” and civilization; and “Life Without Principle,” a passionate critique of American materialism and conformity. Also here are literary essays, including pieces on Homer, Chaucer, and Carlyle; the travel essay “A Yankee in Canada”; speeches in defense of John Brown; and works on natural history written during the last years of Thoreau’s life, such as “The Succession of Forest Trees,” “Wild Apples,” and “Huckleberries.”

Many of the poems are presented here in versions based on Thoreau’s journal and manuscripts. Poems he excerpted for A Week on the Concord and Merrimack Rivers and Walden appear in their entirety. Included are “Sic Vita,” with Thoreau’s searching characterization of himself as “a parcel of vain strivings,” and the visionary “Inspiration.”

This feature require that you enable JavaScript in your browser.
END_OF_DOCUMENT_TOKEN_TO_BE_REPLACED

This feature require that you enable JavaScript in your browser.
END_OF_DOCUMENT_TOKEN_TO_BE_REPLACED

This feature require that you enable JavaScript in your browser.
END_OF_DOCUMENT_TOKEN_TO_BE_REPLACED