Detour and Access: Strategies of Meaning in China and Greece (Paperback) 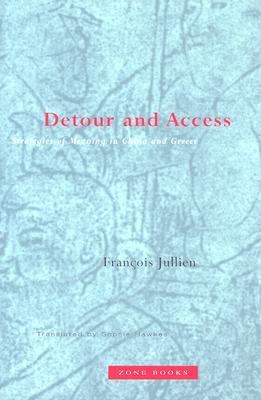 An exploration of the central role of indirect modes of expression in ancient China.

In what way do we benefit from speaking of things indirectly? How does such a distancing allow us better to discover--and describe--people and objects? How does distancing produce an effect? What can we gain from approaching the world obliquely? In other words, how does detour grant access? Thus begins Francois Jullien's investigation into the strategy, subtlety, and production of meaning in ancient and modern Chinese aesthetic and political texts and events. Moving between the rhetorical traditions of ancient Greece and China, Jullien does not attempt a simple comparison of the two civilizations. Instead, he uses the perspective provided by each to gain access into a culture considered by many Westerners to be strange--It's all Chinese to me--and whose strangeness has been eclipsed through the assumption of its familiarity. He also uses the comparison to shed light on the role of Greek thinking in Western civilization. Jullien rereads the major texts of Chinese thought--The Book of Songs, Confucius's Analects, and the work of Mencius and Lao-Tse. He addresses the question of oblique, indirect, and allusive meaning in order to explore how the techniques of detour provide access to subtler meanings than are attainable through direct approaches. Indirect speech, Jullien concludes, yields a complex mode of indication, open to multiple perspectives and variations, infinitely adaptable to particular situations and contexts. Concentrating on that which is not said, or which is spoken only through other means, Jullien traces the benefits and costs of this rhetorical strategy in which absolute truth is absent.

This feature require that you enable JavaScript in your browser.
END_OF_DOCUMENT_TOKEN_TO_BE_REPLACED

This feature require that you enable JavaScript in your browser.
END_OF_DOCUMENT_TOKEN_TO_BE_REPLACED

This feature require that you enable JavaScript in your browser.
END_OF_DOCUMENT_TOKEN_TO_BE_REPLACED