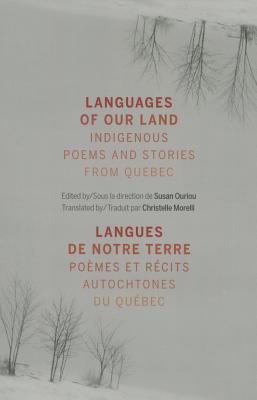 By Susan Ouriou (Editor), Christelle Morelli (Translator)
$18.95
Special Order - may be out of print

Languages of Our Land/Langues de notre terre is a collection of poems and stories by twelve emerging and established Indigenous writers living in Quebec and writing in French. These writers all participated in either the Aboriginal Emerging Writers Program (now the Indigenous Writing Program) at The Banff Centre, funded by the Canada Council for the Arts, or the francophone chapter of this program, Programme a l'intention d'ecrivains autochtones en debut de carriere, in Quebec. The writing within Languages is presented in English translation alongside the French original and interlaced with words in the writers' ancestral Indigenous languages--Innu-aimun, Wendat, Cree, and Algonquin--glossed at the end of the anthology. Editor Susan Ouriou, a Governor General's Award-winning translator and former French-English interpreter and translator for the Aboriginal Emerging Writers Program, states in her preface, "in these poems and stories, as they face the tragedies of the past, demand the righting of wrongs, and prompt change to create a better future, we see a reflection of transformation being wrought in the wider world." This anthology presents readers with an opportunity to experience the rich multiplicity of languages, intonations, and images within the stories and poems authored by those influenced by the languages they've inherited, writing in a language they've embraced.

This feature require that you enable JavaScript in your browser.
END_OF_DOCUMENT_TOKEN_TO_BE_REPLACED

This feature require that you enable JavaScript in your browser.
END_OF_DOCUMENT_TOKEN_TO_BE_REPLACED

This feature require that you enable JavaScript in your browser.
END_OF_DOCUMENT_TOKEN_TO_BE_REPLACED