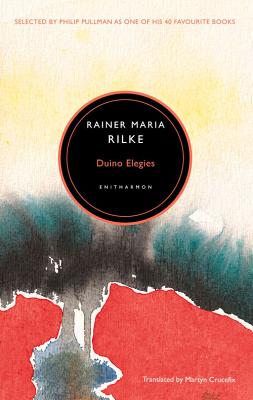 Perhaps no cycle of poems in any European language has made so profound and lasting an impact on an English-speaking readership as Rilke’s Duino Elegies. These luminous new translations by Martyn Crucefix make it marvellously clear how the poem is committed to the real world observed with acute and visionary intensity. Completed in 1922, the same year as the publication of Eliot’s The Waste Land, the Elegies constitute a magnificent godless poem in their rejection of the transcendent and their passionate celebration of the here and now. Troubled by our insecure place in this world and our fractured relationship with death, the Elegies are nevertheless populated by a throng of vivid and affecting figures: acrobats, lovers, angels, mothers, fathers, statues, salesmen, actors and children. This bilingual edition offers twenty-first century readers a new opportunity to experience the power of Rilke’s enduring masterpiece. Selected by Philip Pullman as one of his 40 favourite books. Shortlisted for the Cornelieu M Popscu Prize, 2007.

Rainer Maria Rilke (1875-1926) was born in Prague and led a nomadic existence, living in Germany, Russia, Spain, Italy and France before his death in Switzerland from leukaemia. He dedicated himself exclusively to his work, including the New Poems (1907-8), the semi-autobiographical novel The Notebooks of Malte Laurids Brigge (1910) and Sonnets to Orpheus (1923). The Duino Elegies (1923) is acknowledged as his masterpiece. Martyn Crucefix has won numerous prizes including a major Eric Gregory award and a Hawthornden Fellowship. He has published five collections, and his translation of Rilke s Duino Elegies, published by Enitharmon in 2006, was shortlisted for the Cornelius M Popescu Prize for European Poetry Translation and hailed as unlikely to be bettered for very many years (Magma)."

This feature require that you enable JavaScript in your browser.
END_OF_DOCUMENT_TOKEN_TO_BE_REPLACED

This feature require that you enable JavaScript in your browser.
END_OF_DOCUMENT_TOKEN_TO_BE_REPLACED

This feature require that you enable JavaScript in your browser.
END_OF_DOCUMENT_TOKEN_TO_BE_REPLACED