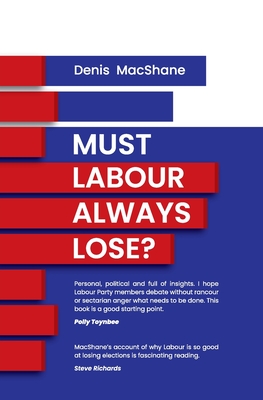 Denis MacShane has seen and been on every part of the Labour Party over the last 50 years. He has fought, lost and won elections to the Commons, local government and the trade union movement. One unique insight he has comes from 15 years work with trade unions and progressive political movement in Europe and overseas. His book is personal, political and full of insights. Much of the European left is down and out and Labour must avoid that fate. I hope Labour Party members debate without rancour or sectarian anger what needs to be done. This book is a good starting point.

Denis MacShane has had a colourful, often controversial life as a journalist-politician in Labour over many years, standing for Parliament in 1974 and being the best Europe Minister of any government until the calamity of Brexit struck. His account of why Labour is so good at losing elections is fascinating reading. What to do to get Labour back into power is a central question if we don't want to live in a one party state

Since 1970, Labour has won power in just 4 of the 14 general elections. This angry, passionate book asks why Labour is so good at losing elections and so unhappy and edgy when it does win.

Denis MacShane joined the Labour Party in 1970, and has held every office at local party level. He stood for the Commons aged 26. He served as an MP for 18 years and was Minister of State for Europe. He draws on experience, meetings with Labour leaders from Jim Callaghan to Jeremy Corbyn, and his personal diaries kept when in the Commons as he tries to answer the question: Why is Labour so keen on fighting internal battles and so useless at winning power?

Denis MacShane's book is full of observations that are witty, personal, and exasperating. They offer insights and pragmatic guidance. Based on the hard lessons he's learned, MacShane offers twelve pragmatic suggestions for turning Labour into a party of power as well as protest.

This feature require that you enable JavaScript in your browser.
END_OF_DOCUMENT_TOKEN_TO_BE_REPLACED

This feature require that you enable JavaScript in your browser.
END_OF_DOCUMENT_TOKEN_TO_BE_REPLACED

This feature require that you enable JavaScript in your browser.
END_OF_DOCUMENT_TOKEN_TO_BE_REPLACED