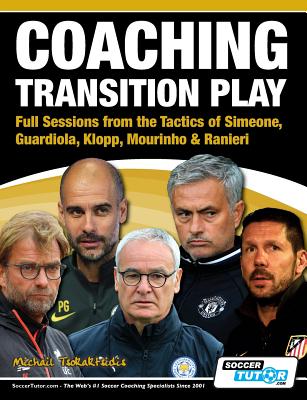 This incredible book helps coaches improve their training sessions in the most important phases of the modern game - the transition phases. The best teams in recent years (Simeone's Atl tico Madrid, Guardiola's Barcelona & Bayern, Klopp's Dortmund, Mourinho's Real Madrid & Ranieri's Leicester) have been successful largely due to their performance in the transition phases.

This book provides analysis of Simeone, Guardiola, Klopp, Mourinho and Ranieri's tactics. Michail Tsokaktsidis is a UEFA 'A' licence coach and has used this analysis to produce 23 full sessions (98 practices) including transition games, game situations and small sided games. You can use these ready-made sessions to practice these top coaches' tactics and find solutions for every tactical situation in the transition from defence to attack and the transition from attack to defence.

Diego Simeone
"I am always enthusiastic and when I came, I said I wanted to rediscover the essence of the club: An Atl tico team that was always aggressive,
intense, competitive, counter-attacking and fast... I think that's what we've been giving."

Pep Guardiola
"I want my players chasing the ball like (dogs chase) dog bones."
"'You cannot be brilliant when you disappear when you don't have the ball. It's impossible. Football is a connection between what you have with the ball and without the ball."

J rgen Klopp
"The best moment to win the ball is immediately after your team just lost it. The opponent is still looking for orientation where to pass the ball. He will have taken his eyes off the game to make his tackle or interception and he will have expended energy. Both make him vulnerable."
"Football is about emotion and speed. It's a transition game".
"If you win the ball back high up the pitch and close to the goal, it is only one pass away a really good opportunity most of the time. No playmaker in the world can be as good as a good counter-pressing situation."

​Jose Mourinho
"What tactical trends do you see at the top level of the game? Transitions have become crucial. When the opponent is organised defensively it is very difficult to score. The moment the opponent loses the ball can be the time to exploit the opportunity of someone being out of position. Similarly when we lose the ball we must react immediately."
"Everybody says that set plays win most games but I think it is more about transitions."

This feature require that you enable JavaScript in your browser.
END_OF_DOCUMENT_TOKEN_TO_BE_REPLACED

This feature require that you enable JavaScript in your browser.
END_OF_DOCUMENT_TOKEN_TO_BE_REPLACED

This feature require that you enable JavaScript in your browser.
END_OF_DOCUMENT_TOKEN_TO_BE_REPLACED