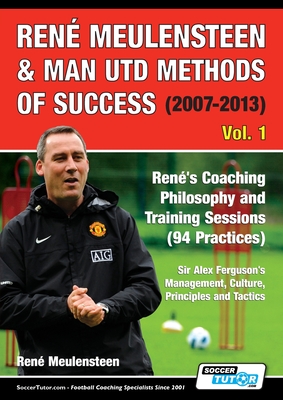 Ren 's expertise provides coaches of all levels a great insight into the key aspects and methods behind Manchester United's success when they won 1 x UEFA Champions League (]2 Runner-up), 4 x Premier Leagues and 1 x League Cup all within 6 seasons.

During this period, Ren was responsible for creating and coaching all of the first team training sessions. He kept a record of every single training session in organised folders, and these Technical and Tactical Practices and Sessions form the basis of this book (94 Practices included).

This book provides a detailed blueprint of the successful structure and organisation of Manchester United, as well as the Management, Leadership, Principles, Tactics and Philosophy of Play of the greatest British manager in history, Sir Alex Ferguson. Find out how Manchester United produced such a High Speed of Play, created Waves of Attacks, and how they scored so many late goals using Scenario Training ("Fergie Time").

All of this content will provide you with a great understanding of the methods behind Manchester United's success, from the training pitch to match days.

As well as the first team training sessions, this book also shows you Ren 's Development Model, Coaching Philosophy, and the importance of Specific Technical Training (1v1s and Finishing). During his time at Manchester United, Ren was attributed to improving the individual technique and performances of Cristiano Ronaldo, Ryan Giggs, Ruud van Nistelrooy, Robin van Persie, Nani, and many others. The practices he used for individual or small group training are included in this book.

This feature require that you enable JavaScript in your browser.
END_OF_DOCUMENT_TOKEN_TO_BE_REPLACED

This feature require that you enable JavaScript in your browser.
END_OF_DOCUMENT_TOKEN_TO_BE_REPLACED

This feature require that you enable JavaScript in your browser.
END_OF_DOCUMENT_TOKEN_TO_BE_REPLACED