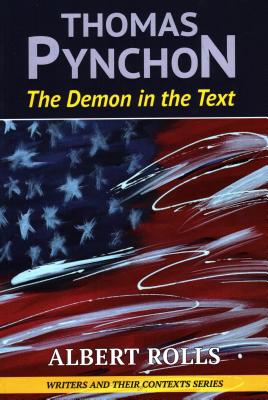 By Albert Rolls
$28.95
usually available in 3-7 days
(This is a special order book which cannot be returned.)

This is a significant new and accessible work on the leading modern American novelist whose works - notably Gravity's Rainbow, which won the 1974 U.S. National Book Award for Fiction - remain mysterious to many, just as his life remains reclusive. Pynchon's fiction and non-fiction writings encompass a vast array of subject matter, genres and themes. His most recent novel is Bleeding Edge, published in September 2013. In Thomas Pynchon: The Demon in the Text, Albert Rolls shows that Pynchon's biography (or the traces of it that have emerged) can inform our understanding of Pynchon's fiction and that the fiction can inform our understanding of the life. The material Rolls uses to present his argument is often marginal and includes the available letters, many of which can be found in libraries; juvenilia, that which Pynchon wrote for his high-school newspaper as well as the unfinished "Minstrel Island"; the essay "Hallowe'en? Over Already?"; newspaper and magazine articles; book trailers and other promotional material; Paul Thomas Anderson's adaptation of Inherent Vice; television shows, The Simpsons and The John Larroquette Show in particular; and the published non-fiction and fiction. Rolls analyzes this material to produce a reading of Pynchon that teases out the importance of the relationship among the public figure Thomas Pynchon, the private individual Tom Pynchon (who, Rolls demonstrates, resides in the text as a sort of Maxwell-Demon-like entity), and those who read Pynchon and sometimes attempt to learn about his life. The result is a study of Pynchon as an idea rather than a life of Pynchon, although biographical details are discussed when they need to be, particularly in endnotes that often serve as essays themselves. Contents: Acknowledgements. Note on the text. Fictional Autobiographies and Autobiographical Fictions. A Dual Man (and Oeuvre), Aimed Two Ways At Once: The Two Directions of Pynchon's Life and Thought. Considering the Enclave. Epilogue. Endnotes. Bibliography. Index.

This feature require that you enable JavaScript in your browser.
END_OF_DOCUMENT_TOKEN_TO_BE_REPLACED

This feature require that you enable JavaScript in your browser.
END_OF_DOCUMENT_TOKEN_TO_BE_REPLACED

This feature require that you enable JavaScript in your browser.
END_OF_DOCUMENT_TOKEN_TO_BE_REPLACED