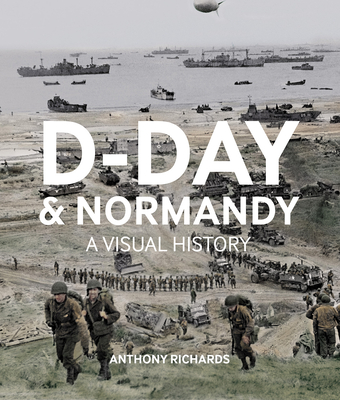 By Anthony Richards
Email or call for price.
Hard to Find - this title is likely out of print

In the hours before dawn on June 6, 1944, an unprecedented assemblage of men, weapons, and machines swung into action. The long-awaited, highly secret D-Day invasion had begun. By the end of the day, the mission to liberate Europe had made its most crucial advance.

This richly illustrated account draws on the unparalleled collections of the Imperial War Museums to reconstruct the invasion and its aftermath through images of artifacts, documents, period photographs, and art. Eyewitness accounts put the reader in the middle of the action, reminding us that even with all the careful planning and firepower the Allies were able to muster, the outcome of the invasion was far from certain. Recreating the drama and danger of D-Day, this book is a perfect commemoration of a day that changed the world.

Anthony Richards is the head of documents and sound at Imperial War Museums.

"These images offer a rare insight into this decisive victory."
— CNN Style

"Incredible photos reveal how D-Day unfolded hour-by-hour 75 years ago . . . . astonishing colour photographs . . . . The collected snaps vividly show the timeline of one of the most crucial military victories for the Allies in the Second World War."
— The Sun

"Rare photos and historians' painstaking detective work map out [the] reality of how the Allies launched the world's biggest ever military op . . . . The shots, published chronologically for the first time ever, have brought to life one of the key turning points of the Second World War."
— The Daily Mail

This feature require that you enable JavaScript in your browser.
END_OF_DOCUMENT_TOKEN_TO_BE_REPLACED

This feature require that you enable JavaScript in your browser.
END_OF_DOCUMENT_TOKEN_TO_BE_REPLACED

This feature require that you enable JavaScript in your browser.
END_OF_DOCUMENT_TOKEN_TO_BE_REPLACED