A History of Central Banking and the Enslavement of Mankind (Paperback) 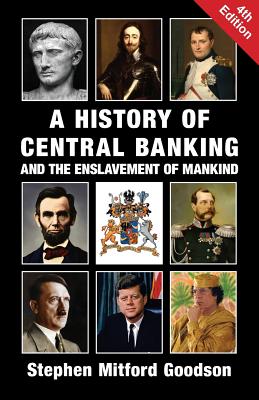 In a 'History of Central Banking and the Enslavement of Mankind' ex-South African banker Stephen Goodson explains how the Central Banking "scam" originated, and how those who run it have throughout history used their power to subvert governments, and manufacture wars that not only produced vast profits, but frequently to topple 'regimes' whose banking system was not under their control.

The 'scam' of the money-lenders is the ability to literally create money from nothing, and then lend and accumulate interest on "credit," and then re-lend that interest for further interest, in perpetuity, that creates pervasive, worldwide debt, from the individual, to the family, to the entire state.

The ability to operate a fraudulent credit and loan system has long been known, and with all the slickness of a snake-oil salesman, the money-lenders - the same types Jesus whipped from the Temple - have persuaded governments that banking is best left to their private interests.

The cultural and material progress of a civilization will often relate to the degree by which it is free from the influence of debt, and the degradation that results when the money-lenders are permitted to abuse their power. Hence, Goodson shows that both World Wars, the Napoleonic wars, the American Revolution, the rise and fall of Julius Caesar, the regicide of Charles I of England, the overthrow of Gaddafi in Libya and the revolution against Tsar Nicholas, among much else in history relate to this "Hidden Hand".

If you wish to have a real understanding of history - look for the influence of the bankers. This is the key to understanding the past, the present and the future.

This feature require that you enable JavaScript in your browser.
END_OF_DOCUMENT_TOKEN_TO_BE_REPLACED

This feature require that you enable JavaScript in your browser.
END_OF_DOCUMENT_TOKEN_TO_BE_REPLACED

This feature require that you enable JavaScript in your browser.
END_OF_DOCUMENT_TOKEN_TO_BE_REPLACED