Wellington at Bay: The Battle of Villamuriel, 25 October 1812 (From Reason to Revolution) (Paperback) 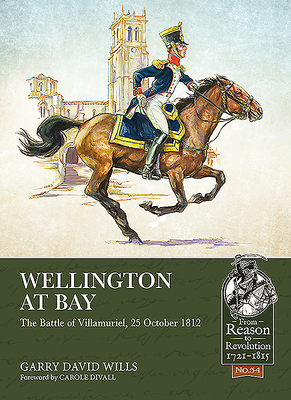 The Battle of Villamuriel was the largest engagement of Wellington's retreat from Burgos in 1812. Twice as many men were involved as in the better-known actions at Villadrigo/Venta del Pozo two days earlier. This is the first full length account of the action and improves significantly on previous accounts in the campaign histories by Napier, Fortescue, Oman, and Divall. Archival sources from Great Britain, France, Spain, and Portugal have been used to build a coherent and balanced account. The orders of battle are detailed and the military experience of both the commanders and their units is provided. Detailed maps of the deployment of both forces throughout the action are provided. A detailed breakdown of the casualties on both sides is also given. Also highlighted are the previously unreported role of 9th Foot as an aspiring light infantry regiment, and the 1835 controversy around Napier's account using the archives of the Sir John Oswald and a potential source for Napier's account is identified. This has resulted in a detailed study of one day's action in the 1812 campaign, with a view to extracting improved understanding of how the armies fought. The wargamer is provided with detailed scenarios to enable them to recreate the action on the table top. The action is effectively a rematch between the Anglo-Portuguese 5th Division and the 5e Division of the Arm e de Portugal, only a few months after the former successfully dispersed the latter at Salamanca in July.

Wellington at Bay includes a Foreword by Carole Divall.

This feature require that you enable JavaScript in your browser.
END_OF_DOCUMENT_TOKEN_TO_BE_REPLACED

This feature require that you enable JavaScript in your browser.
END_OF_DOCUMENT_TOKEN_TO_BE_REPLACED

This feature require that you enable JavaScript in your browser.
END_OF_DOCUMENT_TOKEN_TO_BE_REPLACED