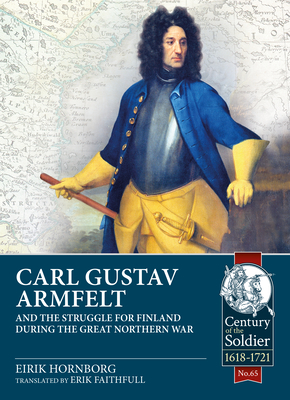 Charles XII's planned conquest of Norway died with him at Fredriksten fortress on 30 November 1718 (OS), and the small Swedish-Finnish army simultaneously besieging Trondheim was ordered to return to Sweden. Setting off on the final stage across the mountains on New Year's Day 1719 the army was struck by a blizzard harsher than any in living memory, and an orderly withdrawal turned into what has become infamously known as the Carolean Death March. That army was commanded by General Carl Gustav Armfelt, one of the great and tragic figures of Finnish and Swedish history, hero of Finland's brave but ultimately hopeless struggle against Russia under Peter the Great during the Great Northern War 1700-21.

This book draws on much primary source material to describe Armfelt's military career. He was already an experienced soldier at the outbreak of the war having spent 11 years in the army of Louis XIV. The book describes his role in opposing the relentless march of the Russian forces in rolling back the eastern frontier of the Swedish empire from his Ingrian homeland through Finland and into Sweden itself. It concludes with the ill-fated Trondheim campaign during the empire's final death throes and Armfelt's final years in Finland after the war.

The author, Eirik Hornborg (1879-1965), was one of Finland's leading and most prolific historical writers. The book was originally published in 1953 and this translation, by a descendent of General Armfelt, provides the first comprehensive account in English of the Great Northern War in Finland.

This feature require that you enable JavaScript in your browser.
END_OF_DOCUMENT_TOKEN_TO_BE_REPLACED

This feature require that you enable JavaScript in your browser.
END_OF_DOCUMENT_TOKEN_TO_BE_REPLACED

This feature require that you enable JavaScript in your browser.
END_OF_DOCUMENT_TOKEN_TO_BE_REPLACED