Sexual Sabotage: How One Mad Scientist Unleashed a Plague of Corruption and Contagion on America (Hardcover) 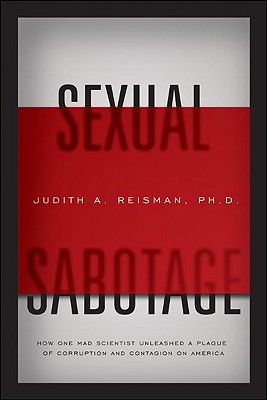 To Andy Rooney and the Greatest Generation, sex was only a rumor. But to an Indiana University zoology professor, wholesome American youth were in fact promiscuous and adulterous. Alfred Kinsey's bias-masquerading-as-research became accepted wisdom, thus tainting generations of Americans. Now, in a comprehensive and investigative fashion, Judith Reisman traces not only the effects of Kinsey's diabolical research, but describes those early, falsely accused generations in very different terms, because she lived through those times. The combination of Reisman's exhaustive research and personal knowledge of the times in which Kinsey worked make this book a thoroughly engaging read, documenting a crucial societal shift.

Dr. Judith Reisman is a consultant and former president of The Institute for Media Education, and is the scientific advisor for the California Protective Parents Association. A sought-after expert in the field of Media Forensics, Dr. Reisman is also an author and has been a consultant to four U.S. Department of Justice administrations.

This feature require that you enable JavaScript in your browser.
END_OF_DOCUMENT_TOKEN_TO_BE_REPLACED

This feature require that you enable JavaScript in your browser.
END_OF_DOCUMENT_TOKEN_TO_BE_REPLACED

This feature require that you enable JavaScript in your browser.
END_OF_DOCUMENT_TOKEN_TO_BE_REPLACED