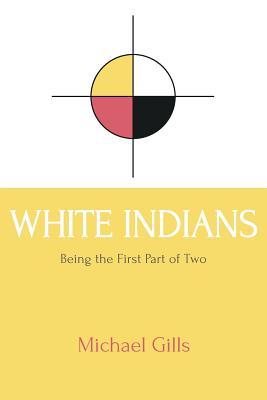 By Michael Gills
Email or call for price.
usually available in 5-10 days

In this book of creative non-fiction essays Gills tells us stories from his life. The title piece, "White Indians," is a "visionary memoir" that recounts Gills' experience as a participant at a Native American Sundance ceremony on Zuni Territory, New Mexico during July 2005. The ceremony unfolds on a wolf refuge and at night, tending fire, the howling is startling music that informs this text throughout. Sixty men and women dance and pierce themselves during four days, offering flesh to a ninety-feet tall cottonwood, wrapped and glimmering with thousands upon thousands of prayer ties. The breathtaking pageantry of the dance is offset by the shock of seeing flesh offerings taken in the splendor of elaborate costumes and the continuous drumbeat and singing under an enormous sky. As firekeeper, the narrator is responsible for heating stones for the sacred inipi. Later in the dance, a scarred old heyoka (backward/forward man) ushers him into the arena where for some time he moves among the dancers under the tree. His perspective is an insider's, riveted by every detail. The result is the first of a two-book work, seldom if ever seen in American Literature, that places this ceremony in the larger context of Native American prophecy--the return of lost white brother, and the end of the fourth world.

This feature require that you enable JavaScript in your browser.
END_OF_DOCUMENT_TOKEN_TO_BE_REPLACED

This feature require that you enable JavaScript in your browser.
END_OF_DOCUMENT_TOKEN_TO_BE_REPLACED

This feature require that you enable JavaScript in your browser.
END_OF_DOCUMENT_TOKEN_TO_BE_REPLACED