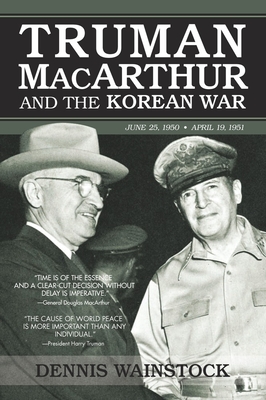 By Dennis D. Wainstock
$19.00
Special Order - may be out of print
(This is a special order book which cannot be returned.)

At 4:00 a.m. on June 25, 1950, North Korean artillery began pounding South Korean positions: the Korean War began. American officials had seriously underestimated the North Korean forces that quickly invaded South Korea nearly overrunning the country. US intelligence had failed to predict the attack. In Japan General Douglas MacArthur was sending in gloomy reports after President Truman had decided the United States had to stand up to Communist aggression in East Asia. A duel began between the president and the general throughout the first full year of the war, ending with the sacking of the man many Americans considered a national hero.

This feature require that you enable JavaScript in your browser.
END_OF_DOCUMENT_TOKEN_TO_BE_REPLACED

This feature require that you enable JavaScript in your browser.
END_OF_DOCUMENT_TOKEN_TO_BE_REPLACED

This feature require that you enable JavaScript in your browser.
END_OF_DOCUMENT_TOKEN_TO_BE_REPLACED