A Forest Journey: The Role of Trees in the Fate of Civilization (Hardcover) 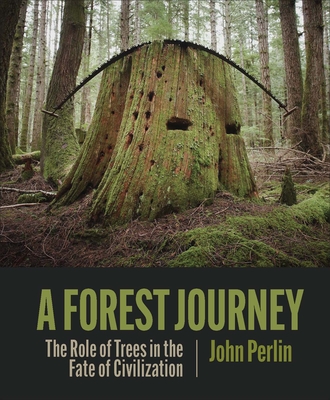 Ancient writers observed that forests always recede as civilizations develop and grow. The great Roman poet Ovid wrote that before civilization began, "even the pine tree stood on its own very hills" but when civilization took over, "the mountain oak, the pine were felled."

This happened for a simple reason: trees have been the principal fuel and building material of every society over the millennia, from the time urban areas were settled until the middle of the nineteenth century. To this day trees still fulfill these roles for a good portion of the world's population.

Without vast supplies of wood from forests, the great civilizations of Sumer, Assyria, Egypt, Crete, Greece, Rome, the Islamic World, Western Europe, and North America would have never emerged. Wood, in fact, is the unsung hero of the technological revolution that has brought us from a stone and bone culture to our present age.

Until the ascendancy of fossil fuels, wood was the principal fuel and building material from the dawn of civilization. Its abundance or scarcity greatly shaped, as A Forest Journey ably relates, the culture, demographics, economy, internal and external politics and technology of successive societies over the millennia.

The Forest Journey was originally published in 1989 and updated in 2005. The book's comprehensive coverage of the major role forests have played in human life -- told with grace, fluency, imagination, and humor -- gained it recognition as a Harvard Classic in Science and World History and as one of Harvard's "One Hundred Great Books." Others receiving the honor include such luminaries as Stephen Jay Gould and E.O. Wilson. This is a foundational conservation story that should not be lost in the archives. This new, updated and revised edition emphasizes the importance of forests in the fight against global warming and the urgency to protect what remains of the great trees and forests of the world.

This feature require that you enable JavaScript in your browser.
END_OF_DOCUMENT_TOKEN_TO_BE_REPLACED

This feature require that you enable JavaScript in your browser.
END_OF_DOCUMENT_TOKEN_TO_BE_REPLACED

This feature require that you enable JavaScript in your browser.
END_OF_DOCUMENT_TOKEN_TO_BE_REPLACED