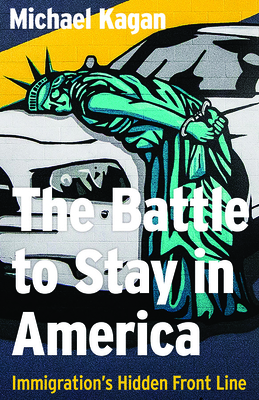 "Day-to-day life in immigrant communities is described with refreshing clarity and heart... an unusually accessible primer on immigration law and a valuable guide to the ways it currently works to perpetuate an excluded immigrant underclass with diminished rights."

—The New York Review of Books

The national debate over American immigration policy has obsessed politicians and disrupted the lives of millions of people for decades. The Battle to Stay in America focuses on Las Vegas, Nevada–a city where more than one in five residents was born in a foreign country, and where the community is struggling to defend itself against the federal government’s crackdown on undocumented immigrants. Told through the eyes of an immigration lawyer on the front lines of that battle, this book offers an accessible, intensely personal introduction to a broken legal system. It is also a raw, honest story of exhaustion, perseverance, and solidarity. Michael Kagan describes how current immigration law affects real people’s lives and introduces us to some remarkable individuals—immigrants and activists—who grapple with its complications every day. He explains how American immigration law often gives good people no recourse. He shows how under President Trump the complex bureaucracies that administer immigration law have been re-engineered to carry out a relentless but often invisible attack against people and families who are integral to American communities.

Kagan tells the stories of people desperate to escape unspeakable violence in their homeland, children separated from their families and trapped in a tangle of administrative regulations, and hardworking long-time residents suddenly ripped from their productive lives when they fall unwittingly into the clutches of the immigration enforcement system. He considers how the crackdown on immigrants negatively impacts the national economy and offers a deeply considered assessment of the future of immigration policy in the United States. Kagan also captures the psychological costs exacted by fear of deportation and by increasingly overt expressions of hatred against immigrants.

Michael Kagan is the director of the UNLV Immigration Clinic, which defends children and families fighting deportation in Las Vegas and is Joyce Mack Professor of Law at the University of Nevada, Las Vegas. He was a plaintiff in one of the lawsuits that prevented the Trump Administration from adding a question about citizenship to the 2020 census. He has written for The Washington Post, Salon.com, and The Daily Beast and is a leading national scholar of immigration and refugee law.

"Day-to-day life in immigrant communities is described with refreshing clarity and heart by Michael Kagan in The Battle to Stay in America.... He provides an unusually accessible primer on immigration law and a valuable guide to the ways it currently works to perpetuate an excluded immigrant underclass with diminished rights.
—The New York Review of Books

"This is the immigration story that needs to be told: the disappearances of neighbors, the breaking up of families, the parents who are forever relegated to working jobs below their potential because immigration laws prevent them ever being free and equal .... The Battle to Stay in America could not be more timely; with a changing Administration it's time not just to rethink America's immigration policy, but change how we think about immigration entirely."
—New Books Network

“Can’t recommend it highly enough ... Riveting, horrifying, raw, and personal. Kagan uses real people who make up the unseen fabric of Vegas to tell harrowing stories. ... Kagan shows the toll the system has taken on him and society. He also has ideas for solutions.”
—Jon Ralston, Editor, The Nevada Independent

“Converts headlines into personal tales of struggles to circumvent and survive immigration policing in the modern era. . . . That’s a story that should be told, and Kagan does it remarkably well.”
—César Cuauhtémoc García Hernández, author of Migrating to Prison

“The Battle to Stay in America provides a compelling set of narratives and combines these stories with accessible explanations as to the legal underpinnings behind them. . . . An excellent book!”
—Shoba Sivaprasad Wadhia, Esq., author of Banned: Immigration Enforcement in the Time of Trump

“Michael Kagan has written one of the most straightforward guidebooks to our complicated, illogical, and often cruel immigration system I’ve read. Drawing from his deep personal experience as the director of the Immigration Clinic at the University of Nevada Las Vegas, Kagan offers readers an up-close view of immigration enforcement and the progressive political response in the Trump era. Those repelled by our polarized immigration debate dominated by voices of the shrill and uninformed can look to Kagan for nuance, reflective analysis and understanding.”
​—Roque Planas, senior reporter, HuffPost

“Kagan's narrative and personal style adds to the immigration law literature what so many other books lack: compassion. Kagan shows us that immigration law is ultimately about the neighbors who disappear and the inhumane system of immigration laws that makes it possible."
​—William D. Lopez, author of Separated: Family and Community in the Aftermath of an Immigration Raid

“This book is unlike any other immigration book I have ever read.”
—Dr. Doris Marie Provine, co-author of Policing Immigrants: Local Law Enforcement on the Front Lines

This feature require that you enable JavaScript in your browser.
END_OF_DOCUMENT_TOKEN_TO_BE_REPLACED

This feature require that you enable JavaScript in your browser.
END_OF_DOCUMENT_TOKEN_TO_BE_REPLACED

This feature require that you enable JavaScript in your browser.
END_OF_DOCUMENT_TOKEN_TO_BE_REPLACED