Grant's Tomb: The Epic Death of Ulysses S. Grant and the Making of an American Pantheon (Hardcover) 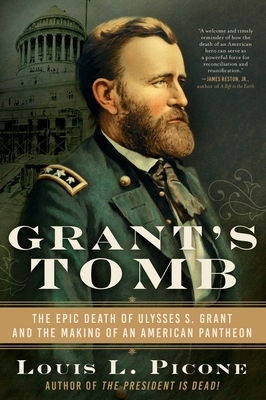 The moving story of Ulysses S. Grant's final battle, and the definitive account of the national memorial honoring him as one of America's most enduring heroes

The final resting place of Ulysses S. Grant, the victorious general in the Civil War and the eighteenth president of the United States, is a colossal neoclassical tomb located in the most dynamic city in the country. It is larger than the final resting place of any other president or any other person in America. Since its creation, the popularity and condition of this monument, built to honor the man and what he represented to a grateful nation at the time of his death, a mere twenty years after the end of the Civil War, have reflected not only Grant's legacy in the public mind but also the state of New York City and of the Union.

In this fascinating, deeply researched book, presidential historian Louis L. Picone recounts the full story. He begins with Grant's heroic final battle during the last year of his life, to complete his memoirs in order to secure his family's financial future while contending with painful, incurable cancer. Grant accomplished this just days before his death, and his memoirs, published by Mark Twain, became a bestseller. Accompanying his account with numerous period photographs, Picone narrates the national response to Grant's passing and how his tomb came to be: the intense competition to be the resting place for Grant's remains, the origins of the memorial and its design, the struggle to finance and build it over the course of twelve years, and the vicissitudes of its afterlife in the history of the nation up to recent times.

Louis L. Picone is the award-winning author of The President Is Dead! The Extraordinary Stories of the Presidential Deaths, Final Days, Burials, and Beyond and Where the Presidents Were Born: The History and Preservation of the Presidential Birthplaces. He holds a master's in History and teaches American history at William Paterson University in Wayne, New Jersey. Louis is a member of the Authors Guild, Mensa International, and the American Historical Association. He is also a trustee on the board of the Grover Cleveland Birthplace Memorial Association in Caldwell, New Jersey. Louis has spoken widely on the topic of the presidents and the places we commemorate them, including at the Grover Cleveland Birthplace State Historic Site, Morristown National Historical Park, James A. Garfield National Historic Site, and the June 2016 international conference "U.S. Presidents and Russian Rulers" at the Russian Academy of Sciences in Moscow. He lives in Succasunna, New Jersey.

"Grant’s Tomb is a book to be savored by anyone with an interest in American history. . . . An engrossing look at the fight to memorialize the former president’s final resting place. . . Deeply researched, accessible, and gets to the truth."—Washington Independent Review of Books

"My favorite book this year, as it speaks to the political times we inhabit: Louis L. Picone’s recounting not so much of who’s buried in Grant’s tomb but why the great man rests in an oversized mausoleum in a remote corner of Upper Manhattan."—Bill Whalen, contributing columnist, Washington Post

“I enjoyed no book more than Louis Picone’s Grant’s Tomb . . . Picone describes Grant—oddly caricatured and overlooked today—for the epic figure he truly was . . . [and] effectively deals with the financial hardships that Grant faced after he left the presidency, the writing of those memoirs with publishing help from Mark Twain, and Grant’s courageous battle with his terminal illness.”—Mike Lunsford, Tribune-Star

"Picone’s level of detail staggers, and readers with a deep interest in Grant’s legacy and the history of America’s monuments will best appreciate this exhaustive account."—Publishers Weekly

"This chronicle resonates with contemporary arguments over the role of historical monuments."—Booklist

"A fresh look at the United States figure who made President Abraham Lincoln’s resolve to maintain the union during the Civil War a reality . . . in an era when monuments are being re-evaluated for their significance, political divisiveness seems insurmountable, and individuals feel ineffectual, the story of this monument is in a way a fable for out times."—US1 Princeton Info

"The death of Ulysses S. Grant helped unite a nation still healing from the Civil War, but it also touched off a fascinating and often contentious debate: How best to memorialize the general who saved the Union? In Grant’s Tomb, Louis Picone superbly weaves the somber with the absurd, and brings to vivid life the colorful cast of characters that built the memorial, from titans of industry to children holding bake sales. Grant’s Tomb also examines the memorial’s enduring place in the American psyche, from Groucho Marx to hip hop. At the end, readers will learn that there’s more than one answer to the question. 'Who’s buried in Grant’s Tomb?”—Matthew Algeo, author of Harry Truman's Excellent Adventure

"Sometimes a tomb tells a story all its own. In his moving new book, Louis Picone reveals the fascinating and forgotten tale behind the creation of a memorial befitting Ulysses S. Grant. Like the tomb itself, this book embodies the courage and complexity of a celebrated Civil War hero, flawed former president, and one of history’s most memorable men.”—Candice Millard, New York Times bestselling author of The River of Doubt

“Louis Picone’s fine book is a welcome and timely reminder of how the death of an American hero can serve as a powerful force for reconciliation and reunification after divisive struggle. Picone gives us the broader context with his riveting account of Grant’s struggle in his final days to write his memoirs with the help of Mark Twain and with the enormous outpouring of love for the general who saved the union. We can lament with the author that Grant’s Tomb in Riverside Park in New York is not more appreciated today.“—James Reston, Jr., author of A Rift in the Earth: Art, Memory, and the Fight for a Vietnam War Memorial

"Louis Picone’s Grant’s Tomb offers a well-researched and captivating description of the origins, building, and early decades of New York City’s neoclassical Ulysses S. Grant Monument, as well as its later fall from grace. Readers of this fine book, which is accompanied by striking images, will learn much about the politics and money behind monuments as well as the vagaries of public memory, all set within a story of how a once venerated monument was allowed to deteriorate into a graffiti-tarnished, crumbling pile in the late twentieth century."—Joan Waugh, author of U.S. Grant, American Hero, American Myth

"Grant’s Tomb offers a new generation a compelling way to discover the monument in its many layers, some invisible to visitors except as history. Picone tells with great skill what is at the end of the day a very human story, filled with unexpected twists and turns. He includes much welcome historical and cultural context, besides drawing from his own expertise in the presidency to explain the uniqueness of the story of Grant and his final resting place."—Frank Scaturro, president of the Grant Monument Association and author of President Grant Reconsidered

"Louis Picone has done us all a great service in this readable and richly detailed overview of the most visible yet least-studied aspect of U. S. Grant’s life: his death and burial. Grant’s Tomb was the place where my own awakening, as a descendant and name-bearer of the great general, began. The rise and fall and phoenix-like rebirth of the Tomb embodies the reality of the public’s perception of Ulysses S. Grant over 150 years. Picone not only gives us the facts, but he puts the Tomb, and its occupants, into the fascinating and complicated historical and social context of this country over the past turbulent century."—Ulysses Grant Dietz, great-great-grandson of Ulysses S. Grant

This feature require that you enable JavaScript in your browser.
END_OF_DOCUMENT_TOKEN_TO_BE_REPLACED

This feature require that you enable JavaScript in your browser.
END_OF_DOCUMENT_TOKEN_TO_BE_REPLACED

This feature require that you enable JavaScript in your browser.
END_OF_DOCUMENT_TOKEN_TO_BE_REPLACED