Every Reason to Fail: The Unlikely Story of Miss Montana and the D-Day Squadron (Paperback) 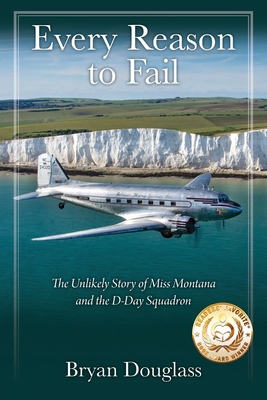 Every Reason to Fail is unlike anything you've ever read.

It's not a history book, but it's full of old history--and new history--from cover to cover, and with historic people and airplanes to boot

It's not a mystery book, but it's full of genuine suspense and intrigue.

It's not an aviation book, but in it you will get a glimpse into the real world of aviation and aviators that few will ever be fortunate enough to experience.

It's not a geography book, but The Crew will take you to places you've probably never heard of, and few will ever go.

It's not a self-help book, but in it you might find the inspiration to attempt something worthwhile that seems impossible.

It's not a military book, but it's full of military history and it's main characters are old warbirds.

It's not a book on project management, but you will learn many things about how NOT to run a major project...and why those things don't matter if you get the main things right.

The mission seemed simple enough. Completely restore a 75-year-old historic DC-3 and fly her from Montana to France for the 75th anniversary of the D-Day invasion. Starting with no volunteers and no money. In under a year. With a crew that had only a few hours of experience flying one. Ride along with author and pilot Bryan Douglass, the rest of the flight crew, the volunteers, paratroopers, World War II veterans, and others on this inspirational story of an impossible dream that almost didn't come true. The underdog of the D-Day Squadron faced insurmountable odds, constant delays and a shortage of nearly everything except determination. The idea of crossing the north Atlantic in a 75-year-old, newly restored airplane only a few hours after her first flight would terrify most, but you'll meet the people who believed it could be done. The transatlantic journey of the D-Day Squadron's "Mighty Fifteen" was an incredible feat, but the story of Miss Montana is the best of them all. Laugh, cry, and be amazed as you get the entire inside story from a pilot who was there.

This feature require that you enable JavaScript in your browser.
END_OF_DOCUMENT_TOKEN_TO_BE_REPLACED

This feature require that you enable JavaScript in your browser.
END_OF_DOCUMENT_TOKEN_TO_BE_REPLACED

This feature require that you enable JavaScript in your browser.
END_OF_DOCUMENT_TOKEN_TO_BE_REPLACED