Leave the Gun, Take the Cannoli: The Epic Story of the Making of The Godfather (Paperback) 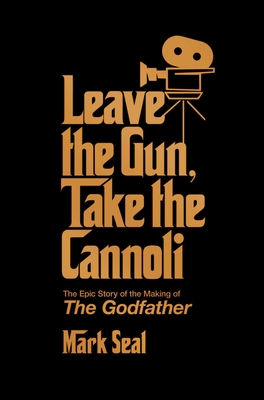 By Mark Seal
$18.99
Unavailable
Not Yet Published

This “wickedly pacey page-turner” (Total Film) unfurls the behind-the-scenes story of the making of The Godfather, fifty years after the classic film’s original release.

The story of how The Godfather was made is as dramatic, operatic, and entertaining as the film itself. Over the years, many versions of various aspects of the movie’s fiery creation have been told—sometimes conflicting, but always compelling. Mark Seal sifts through the evidence, has extensive new conversations with director Francis Ford Coppola and several heretofore silent sources, and complements them with colorful interviews with key players including actors Al Pacino, James Caan, Talia Shire, and others to write “the definitive look at the making of an American classic” (Library Journal, starred review).

On top of the usual complications of filmmaking, the creators of The Godfather had to contend with the real-life members of its subject matter: the Mob. During production of the movie, location permits were inexplicably revoked, author Mario Puzo got into a public brawl with an irate Frank Sinatra, producer Al Ruddy’s car was found riddled with bullets, men with “connections” vied to be in the cast, and some were given film roles.

As Seal notes, this is the tale of a “movie that revolutionized filmmaking, saved Paramount Pictures, minted a new generation of movie stars, made its struggling author Mario Puzo rich and famous, and sparked a war between two of the mightiest powers in America: the sharks of Hollywood and the highest echelons of the Mob.”

“For fans of books about moviemaking, this is a definite must-read” (Booklist).

Mark Seal joined Vanity Fair as a contributing editor in 2003, covering stories as varied as the Bernie Madoff scandal, Ghislaine Maxwell, Tiger Woods, the fall of Olympian Oscar Pistorius, the making of classic films such as Pulp Fiction, and many more. His 2016 Vanity Fair article “The Over the Hill Gang,” about a gang of retired thieves who pulled off the biggest jewel heist in British history, was the basis of the 2018 film, King of Thieves, starring Michael Caine. In addition to Leave the Gun, Take the Cannoli, he is the author of the books Wildflower and The Man in the Rockefeller Suit. His website is Mark-Seal.com.

“Mark Seal’s seductive book about the making of The Godfather – often with help of the men it was about – could be a movie itself. He couldn’t have gotten any closer and lived to type about it.”
— Nicholas Pileggi, #1 New York Times bestselling author of Wise Guy: Life in a Mafia Family and Casino: Love and Honor in Las Vegas

"As gloriously Homeric and entertaining as The Godfather itself. I learned something new on almost every page."
— Graydon Carter, editor, Air Mail

“Rollicking and entertaining, Leave the Gun, Take the Cannoli lays bare not only the massive executive egos at war during The Godfather’s journey to the screen, and the artistic struggles of the young and despairing Francis Coppola who thought he had a failure on his hands, but also the fascinating tales of how the mob muscled in and protected its production. Mark Seal has chronicled a classic cinematic history that conjures all the alchemy of The Godfather’s magic.”
— Maureen Orth, international bestselling author of Vulgar Favors: The Hunt for Andrew Cunanan, the Man Who Killed Gianni Versace

“If you love The Godfather, or American movies, or American gangsters, or just a truly great read, Mark Seal’s Leave the Gun, Take the Cannoli is the book for you. It’s the rollicking inside story behind the making of what may be America’s greatest movie – I couldn’t put it down.’'
— Bryan Burrough, #1 New York Times bestselling coauthor of Barbarians at the Gate and Forget the Alamo

“Absorbing and unforgettable. As sweeping and vivid as The Godfather itself, Leave the Gun, Take the Cannoli captures moviemaking at its most tumultuous. Mark Seal is a master storyteller, bringing to life the embattled young director Coppola, the unpredictable Brando, and the upstart Pacino with made-for-Hollywood panache.”
— Robert Draper, New York Times bestselling author of To Start a War: How the Bush Administration Took America into Iraq

"A ne plus ultra page-turner on the making of the ultimate mafia movie."
— The Globe and Mail

“Leave the Gun, Take the Cannoli captured me with its joyful energy, extensive research and breathless enthusiasm.”
— Glenn Frankel, The Washington Post

"In his detail rich and decidedly definitive saga . . . [Seal] has done a remarkable job of transforming this crazy patchwork quilt into a solidly structured narrative that’s almost as astounding as what Mario Puzo got on the page and Coppola on the screen.”
— Tom Zito, Alta

“If you think the 1972 movie The Godfather is dramatic, wait until you hear its backstory—from how Mario Puzo wrote his 1969 novel (the basis for the film) in a desperate frenzy to pay off his many debts, to the filmmakers’ battles with real-life mobsters. It’s a fitting tribute on the cusp of the great film’s 50th anniversary in March.”
— Christina Ianzito, AARP The Magazine

". . . a thorough, detailed, and beautifully written account of the creation of a masterpiece, as much of a page-turner as the novel that inspired it all."
— Jason Bailey, The Playlist

“Combining extensive research with insightful new interviews, this chronicle of The Godfather could be the definitive look at the making of an American classic.”
— Library Journal, starred review

“[Seal] makes us an offer we can’t refuse with this detailed, fascinating, and frequently surprising look at the origins and filming of The Godfather … Few movies have had such tumultuous origins and turned out to be undisputed classics, and Seal does a superb job of telling us exactly how this happened. For fans of books about moviemaking, this is a definite must read.”
— David Pitt, Booklist

“A colorful new book … that tells you everything you thought you knew about the making of The Godfather but didn’t … such a page-turner.
— Michael Granberry, The Dallas Morning News

“Lives up to the title and delivers epic indeed. Written by the veteran reporter Mark Seal, even if you think you knew it all about the making of this classic, there’s plenty of surprises still left.”
— Richard Rushfield, The Ankler

“A blow by blow, bullet by bullet account of the way it went down . . .The Godfather is a film about whose making you can never grow tired of hearing, fact or legend. Seal has, in this book, reminded us exactly why and perhaps added to the list of the best film books ever written.”
— The Comic Crush

This feature require that you enable JavaScript in your browser.
END_OF_DOCUMENT_TOKEN_TO_BE_REPLACED

This feature require that you enable JavaScript in your browser.
END_OF_DOCUMENT_TOKEN_TO_BE_REPLACED

This feature require that you enable JavaScript in your browser.
END_OF_DOCUMENT_TOKEN_TO_BE_REPLACED