Why We Fight: The Roots of War and the Paths to Peace (Hardcover) 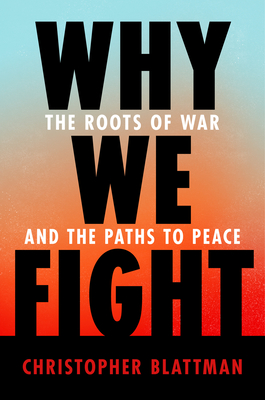 “Why We Fight  reflects Blattman’s expertise in economics, political science, and history… Blattman is a great storyteller, with important insights for us all.” —Richard H. Thaler, winner of the Nobel Memorial Prize in Economic Sciences and coauthor of Nudge

“Engaging and profound, this deeply searching book explains the true origins of warfare, and it illustrates the ways that, despite some contrary appearances, human beings are capable of great goodness.”—Nicholas A. Christakis author of Blueprint: The Evolutionary Origins of a Good Society

Why did Russia attack Ukraine? Will China invade Taiwan and launch WWIII? Why has the number of civil wars reached their highest level in decades? Why are so many cities in the Americas plagued with violence? And finally, what can any of us do about it?

It feels like we’re surrounded by violence. Each conflict seems unique and insoluble. With a reason for every war and a war for every reason, what hope is there for peace? Fortunately, it’s simpler than that. Why We Fight boils down decades of economics, political science, psychology, and real-world interventions, giving us some counterintuitive answers to the question of war.

The first is that most of the time we don’t fight. Around the world, there are millions of hostile rivalries, yet only a fraction erupt into violence. Most enemies loathe one another in peace. The reason is simple: war is too costly to fight. It’s the worst way to settle our differences.
In those rare instances when fighting ensues, that means we have to ask ourselves: What kept rivals from the normal, grudging compromise? The answer is always the same: It’s because a society or its leaders ignored those costs of war, or were willing to pay them.

Why We Fight shows that there are just five ways this happens. From warring states to street gangs, ethnic groups and religious sects to political factions, Christopher Blattman shows that there are five reasons why violent conflict occasionally wins over compromise.
Through Blattman’s time studying Medellín, Chicago, Liberia, Northern Ireland, and more, we learn the common logics driving vainglorious monarchs, dictators, mobs, pilots, football hooligans, ancient peoples, and fanatics. Why We Fight shows that war isn’t a series of errors, accidents, and emotions gone awry. There are underlying strategic, ideological, and institutional forces that are too often overlooked.
So how to get to peace?

Blattman shows that societies are surprisingly good at interrupting and ending violence when they want to—even gangs do it. The best peacemakers tackle the five reasons, shifting incentives away from violence and getting rivals back to dealmaking. And they do so through tinkering, not transformation.

Realistic and optimistic, this is a book that lends new meaning to the adage “Give peace a chance.”

Christopher Blattman is the Ramalee E. Pearson Professor of Global Conflict Studies at the University of Chicago, where he coleads the Development Economics Center and directs the Obama Foundation Scholars program. His work on violence, crime, and poverty has been widely covered by The New York Times, The Washington Post, The Wall Street Journal, Financial Times, Forbes, Slate, Vox, and NPR.

"As what could end up as Europe’s bloodiest war since 1945 grinds on, this is an apposite time for a book explaining why and when human beings fight… Blattman identifies five “logical ways” why, despite all the reasons to compromise, people opt to fight. All five map quite neatly onto the war in Ukraine. [A] valuable guide, supported by engaging anecdotes, to what makes people turn to violence—and why, mercifully, they are usually too sensible to do so.”—The Economist

“Blattman deftly translates knotty ideas from game theory and social choice theory for a lay audience, weaving in colorful anecdotes from his own life and travels.”—Foreign Affairs

"Noting that the high costs of violence almost always make peaceful agreement a better solution to antagonisms than violence, University of Chicago economist Blattman analyzes forces that often counteract that logic, including the self-interest of leaders, ideological passions, miscalculation of an opponent’s strength or motives, and mistrust… This stimulating discussion of violence illuminates a fraught subject with sober reason."—Publishers Weekly

“Blattman shows us things we don’t normally see and takes us to places we might be terrified to go. A captivating and intelligent book.”—Tim Harford, author of The Data Detective and The Undercover Economist

“Engaging and profound, this deeply searching book explains the true origins of warfare, and it illustrates the ways that, despite some contrary appearances, human beings are capable of great goodness.”—Nicholas A. Christakis author of Blueprint: The Evolutionary Origins of a Good Society

“A surprisingly and refreshingly optimistic book, one that deserves a place both on living room and diplomats’ shelves.”—Anne-Marie Slaughter, CEO, New America

“An important, radical book that leaves you hopeful that peace is not a dream and conflict is not inevitable.”—David Miliband, president and CEO, International Rescue Committee

“Economists imagine that people in poor countries wake up every day worrying that they are poor. Maybe, but more fundamentally they are insecure and subject to violence. Foregrounding this most basic human problem is essential for understanding the world we live in today.”—James A. Robinson, coauthor of Why Nations Fail

“Blattman is the go-to social scientist on war. His insights are essential reading.”—William Easterly, author of The White Man’s Burden and The Tyranny of Experts

“Why We Fight not only reflects Blattman’s expertise in economics, political science, and history, it also introduces us to an intriguing range of characters and locations. We meet a warlord from Liberia called White Flower, and in the same chapter learn why George Washington became America’s wealthiest president. Blattman is a great storyteller, with important insights for us all.” —Richard H. Thaler, winner of the Nobel Memorial Prize in Economic Sciences and coauthor of Nudge

“As we move into the third decade of the twenty-first century, humanity is still mired in wars and deadly conflicts. Avoiding the useless dichotomies that ei­ther claim violence is an inseparable part of human nature or declare that humanity has all but con­quered its proclivity to war, Christopher Blattman explains how human communities make use of many different strategies to resolve conflicts, and why these efforts sometimes stumble.”—Daron Acemoglu, coauthor of Why Nations Fail

This feature require that you enable JavaScript in your browser.
END_OF_DOCUMENT_TOKEN_TO_BE_REPLACED

This feature require that you enable JavaScript in your browser.
END_OF_DOCUMENT_TOKEN_TO_BE_REPLACED

This feature require that you enable JavaScript in your browser.
END_OF_DOCUMENT_TOKEN_TO_BE_REPLACED