The Battle of New Orleans: The History and Legacy of the Last Major Battle of the War of 1812 (Paperback) 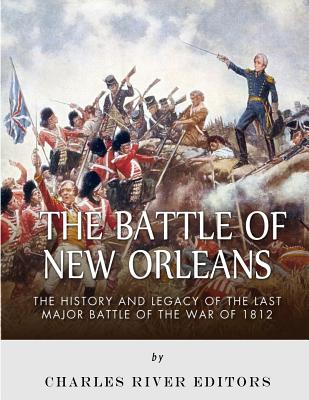 *Includes pictures *Includes accounts of the fighting written by participants on both sides *Includes a bibliography for further reading *Includes a table of contents There are countless examples of battles that take place in wars after a peace treaty is signed. The last battle of the Civil War was a skirmish in Texas that Confederate forces won, nearly a month after Lee's surrender at Appomattox. But it's certainly rare for the most famous battle of a war to take place after the peace treaty is signed. Luckily for Andrew Jackson, the War of 1812 was that unique exception. Less than a year after his victory in the Battle of Horseshoe Creek, Jackson led his forces into a more important battle at the Battle of New Orleans. The British hoped to grab as much of the land on the western frontier as they could, especially New Orleans, which had a prominent position on the Mississippi River for trading. With more than 8,000 soldiers aboard a British fleet sailing in from Jamaica in early January 1815, the attack on New Orleans promised to be a significant one, while Jackson's men defended New Orleans with about half that number. This went on despite the fact that the two sides had signed the Treaty of Ghent on Christmas Eve 1814, which was supposed to end the war. However, the slow nature of bringing news from England to America ensured that the battle would take place anyway. At the beginning of the battle, Jackson and his forces were aided by the weather, with the first fighting taking place in heavy fog. When the fog lifted as morning began, the British found themselves exposed to American artillery. On top of that, Jackson's men held out under an intense artillery bombardment and two frontal assaults on different wings of the battle, before Jackson led a counterattack. By the end of the battle, the Americans had scored a stunning victory. Jackson's men killed nearly 300 British, including their Major General Pakenham and his two lead subordinates. More importantly, nearly 1500 additional British were captured or injured, and the Americans suffered fewer than 500 casualties. The British army had not been fatally wounded, but what the soldiers on both sides thought was the first battle in the Louisiana campaign was costly. The British thus decided that the continued campaign (which intended to conquer all of the Louisiana Purchase that Thomas Jefferson had bought just a few years earlier) would be too costly and end in defeat. Thus, on February 5th, 1815, the British retreated by sea, right around the time news was reaching the west that the war had ended. Though it was an enormous victory for Jackson and the Americans - the most important of the entire war - it proved to be a completely unnecessary one. The Treaty of Ghent had officially ended the war by keeping the status quo ante bellum. This essentially meant that both sides agreed to offer nothing, keeping things as they were before the war, and had the results been different, the British would have been compelled to hand the important port back over. Moreover, by the end of February, Napoleon had successfully escaped exile in Elba, ensuring the British would have to focus their war machine on the French leader who had bedeviled them for over a decade. Regardless, the nation much appreciated Jackson's skills and the Battle of New Orleans was forever christened as one of the greatest in American history. Jackson was honored with a "Thanks from Congress," which was then the nation's highest military honor. Despite the huge failures of the War of 1812 - the Americans lost almost every battle except New Orleans, and Washington D.C. was destroyed - the nation now had something to celebrate. Jackson was celebrated as a hero from the West, marking the first time a "Westerner" held a position of national prominence in the United States, and he would subsequently become one of the 19th century's most influential presidents.

This feature require that you enable JavaScript in your browser.
END_OF_DOCUMENT_TOKEN_TO_BE_REPLACED

This feature require that you enable JavaScript in your browser.
END_OF_DOCUMENT_TOKEN_TO_BE_REPLACED

This feature require that you enable JavaScript in your browser.
END_OF_DOCUMENT_TOKEN_TO_BE_REPLACED