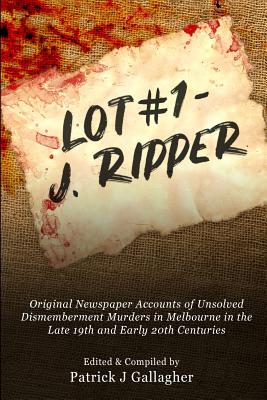 On a warm November evening in 1892, a Mrs Spink and Mrs Underwood, two residents of the Melbourne suburb of Hawthorne, were making their way home. As they proceeded down Manningtree Road, one of the ladies spotted a parcel lying in the middle of the footpath.Curiosity getting the better of them, they opened the hessian-cloth bag, and were horrified to discover two severed human legs. It was then that they noticed the note pinned to the outside of the bag... "Lot #1 - J. Ripper." Police investigations into the origins of the ghastly parcel gained little traction. Then, several days later, another parcel was discovered several miles away in Fawkner Park, South Yarra. This one contained a pair of arms, ascertained by the police to be from the same body as the previously discovered limbs. In 1898 and 1906, there were two more unsolved dismemberment murders in South Melbourne. Curiously, during the late 19th and early 20th centuries, with only one exception, these were the only unsolved dismemberment murders in the entire country, all occurring in one relatively small area of the same city. Three similar, ghastly, unsolved murders, all occurring in the same place, over a relatively short period of time, the like of which have not been seen in Australia since. What was going on in the southern suburbs of Melbourne...?

This feature require that you enable JavaScript in your browser.
END_OF_DOCUMENT_TOKEN_TO_BE_REPLACED

This feature require that you enable JavaScript in your browser.
END_OF_DOCUMENT_TOKEN_TO_BE_REPLACED

This feature require that you enable JavaScript in your browser.
END_OF_DOCUMENT_TOKEN_TO_BE_REPLACED