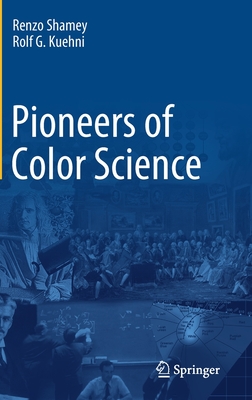 This book provides a comprehensive overview of the historical development of color science, told through the stories of more than 90 of the most prominent figures in the field and their contributions.
The text comprises an extensive set of biographical essays about pioneering scientists in the field of color science, describing their most significant achievements and explaining how their findings influenced the general understanding of color. Grouped by historical period, each part is prefaced with a short introduction that sets the essays into context and helps the reader appreciate the background and the importance of the contributions made.
Beginning with classical Greece and the works of Plato and Aristotle, the book goes on in the second part to describe the advances made by Islamic scholars such as Ibn al-Haytham between the 10th and 15th centuries. The third part covers contributions from Roger Bacon and Theodoric of Freiberg in the same period. Part four includes discussions on color formation and visual perception for a time period from about the 16th to the 18th centuries encompassing the Age of Enlightenment. This part addresses the works of nineteen pioneers including Descartes, Boyle, Newton, Goethe, Lambert, Purkynje, Runge, Dalton, Young and Chevreul.
The final part is the largest section of the book and covers the most recent discoveries and contributions from pioneers born after 1800 and includes over 60 essays. Among the pioneers listed in this chapter are Nobel laureates, vision scientists including Helmholtz, and Hering, and many other notable color pioneers such as Munsell and Land. This part of the book also includes essays on contemporary figures in color science including Adams, Boynton, Crawford, Hardy, MacAdam, Ostwald and Wyszecki and reviews their contributions to this dynamic field.
A useful reference for color scientists, science historians, artists and others, Pioneers of Color Science offers a fascinating insight into the development of color science and the nature of scientific advancement.

Renzo Shamey is a professor of color science and technology and leads the Color Science and Imaging Laboratory at North Carolina State University. He is a Fellow of the Society of Dyers and Colourists, NC State University Faculty Scholar, an honorary professor at Tianjin Polytechnic University (China), a member of the Board of Directors of Inter-Society Color Council, and AATCC and has served as chair of the AATCC color measurement test methods committee, co/chair of CIE technical committees, and as director of the Polymer and Color Chemistry program at NCSU and received several national and international awards. Rolf Kuehni was born and educated in Switzerland and trained as a textile chemist at the Textilingenieurschule in Germany. In 1965 Kuehni joined Verona Dyestuffs as Manager of Development and Color Physics and advanced to Vice President, Marketing/Textile Products for Bayer Corp. and later Dystar Corp. from which he retired in 2001. In 2002 he joined North Carolina State University as an invited Adjunct Professor in color science. From 1987-89 Kuehni was the editor of the journal Color Research and Application. He is the author and co-author of six books on color and many peer-reviewed scientific and technical papers and encyclopaedia articles on color science and technology. He is the recipient of the Armin J. Brunig Award in 1986 from the Federation of Societies for Coatings Technology, the Godlove Award in 2003 from the Inter-Society Color Council (ISCC), the Olney Medal in 2005 from the American Association of Textile Chemists and Colorists, and the Nickerson Award from ISCC in 2015.

This feature require that you enable JavaScript in your browser.
END_OF_DOCUMENT_TOKEN_TO_BE_REPLACED

This feature require that you enable JavaScript in your browser.
END_OF_DOCUMENT_TOKEN_TO_BE_REPLACED

This feature require that you enable JavaScript in your browser.
END_OF_DOCUMENT_TOKEN_TO_BE_REPLACED