NEMS and the Business of Selling Beatles Merchandise in the U.S. 1964-1966 (Hardcover) 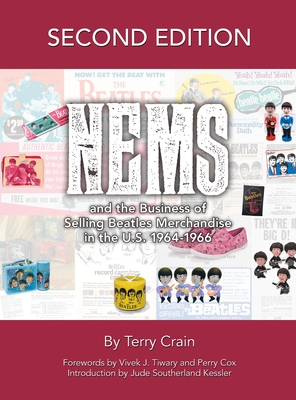 Talk about Pop Culture The book 'NEMS and the Business of Selling Beatles Merchandise in the U.S. 1964-1966' is on sale This coffee-table style hardbound book has over 600+ images, and has recently been accepted into the Rock and Roll Hall of Fame's Library and Archives section. The book covers the approximately 150 licensed items that dotted store shelves and helped fuel the band-crazed fan during the time right after the band landed in America and performed on The Ed Sullivan Show. Toys, games, dolls, jewelry, clothing, wigs, and more.

Terry lives in Murphysboro, Illinois with his wife Linda. He has two sons, Eric and Ryan. He is retired from John A. Logan College, where he was the Dean for Student Services. He worked at the college for over 31 years in the Student Services division where he helped thousands of students with their college endeavors. His educational career has spanned over 35 years total. The author has followed The Beatles and early rock 'n roll since he first saw the band on The Ed Sullivan Show in February 1964. Since then the group and early rock n' roll in general has been a passion. Over the years, Terry has interviewed and/or encountered many important players in The Beatles story and important pop musicians from the Sixties. Artists and players have included Klaus Voormann, Astrid Kirchherr, Pattie Boyd, Sam Leach, Louise Harrison, Chuck Berry, Billy Preston, Victor Spinetti, Tony Barrow, Alistair Taylor, Robert Freeman, Buddy Guy, The Quarrymen, Billy J. Kramer, Mickey Dolenz (The Monkees), Laurence Juber (Wings), Denny Laine (The Moody Blues & Wings), Joey Molland (Badfinger), Gerry Marsden (Gerry and the Pacemakers), Mark Hudson, Donovan Leitch, Peter Noone (Herman's Hermits), Ronnie Spector, Peter (Asher) and Gordon (Waller), Pete Best, Chad (Stewart) and Jeremy (Clyde), Mike Pender (The Searchers), Alan Parsons, Greg Hawkes (The Cars), Gary Wright, Ivor Davis and many others. The author also administers the Facebook sites 'I Feel Fine' and 'Fab Gear - The Sixties.'

This feature require that you enable JavaScript in your browser.
END_OF_DOCUMENT_TOKEN_TO_BE_REPLACED

This feature require that you enable JavaScript in your browser.
END_OF_DOCUMENT_TOKEN_TO_BE_REPLACED

This feature require that you enable JavaScript in your browser.
END_OF_DOCUMENT_TOKEN_TO_BE_REPLACED