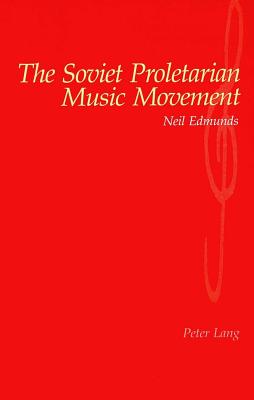 By Neil Edmunds
Email or call for price.

The question of how music and politics interact has always aroused passionate debate, and it looms large in this study of the Soviet proletarian music movement. The proletarian music movement was the driving force behind many of the developments in early Soviet musical life, and its influence was felt long after the groups that belonged to it disbanded in 1932. It consisted of politicians, composers, musicologists, performers and educators who were united by their desire to create a dictatorship of the proletariat in musical life, and develop musical forms that responded to the needs of their new society.
Based largely on primary and contemporary secondary sources, this book charts the history of the proletarian music movement, examines its beliefs, and discusses its work in the fields of musical education, amateur musical activities and composition. It discusses the origins of important characteristics of Soviet musical life, sheds light on a neglected area of early Soviet cultural history, examines how the cultural apparatus was mobilised to instil a political ideology, and challenges how Soviet musical life of the 1920s has traditionally been viewed.

The Author: Neil Edmunds is Lecturer in European History at the University of the West of England, Bristol.

This feature require that you enable JavaScript in your browser.
END_OF_DOCUMENT_TOKEN_TO_BE_REPLACED

This feature require that you enable JavaScript in your browser.
END_OF_DOCUMENT_TOKEN_TO_BE_REPLACED

This feature require that you enable JavaScript in your browser.
END_OF_DOCUMENT_TOKEN_TO_BE_REPLACED