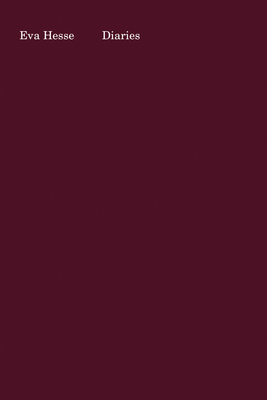 "Giving life to a once white piece of linen stretched on 4 pieces of wood, to create a rich visual experience is indeed an intriguing complete experience," wrote Eva Hesse in a 1957 diary entry between notes on her weekly plans and further musings about her goals as an artist. In this extensive collection of Hesse's diaries, recorded from 1955 to 1970, readers are given an intimate glimpse into the mind of one of contemporary sculpture's most prominent figures. Despite personal tragedies and the difficulties she faced as one of the few female artists in the male-dominated postminimalist movement, Hesse remained intrepid in both her life and craft. Composed of twisted ropes and delicate plastic among other unconventional materials, Hesse's sculptures defy traditional notions of form; her deeply thoughtful practice as a sculptor and a painter are revealed at length in her writing.Born to Jewish parents in 1936, American painter and sculptor Eva Hesse fled Nazi Germany with her older sister at the age of two and eventually reunited with her family in New York City a year later. In 1959 she received her BA from Yale University, and within a few years began creating the sculptures that would put her at the forefront of the postminimalist movement. Though her life was cut short in 1970, Hesse's prolific output of artwork in her decade-long career has cemented her as a pioneer of contemporary sculpture.

This feature require that you enable JavaScript in your browser.
END_OF_DOCUMENT_TOKEN_TO_BE_REPLACED

This feature require that you enable JavaScript in your browser.
END_OF_DOCUMENT_TOKEN_TO_BE_REPLACED

This feature require that you enable JavaScript in your browser.
END_OF_DOCUMENT_TOKEN_TO_BE_REPLACED