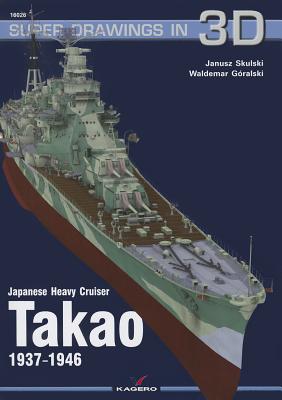 By Waldemar Goralski, Janusz Skulski
$22.95
Special Order - may be out of print

This is book number 26 in the Super Drawings in 3D series.

The design of four-member Japanese Takao-class heavy cruisers built between 1927-1928 was based on earlier Myōkō-class heavy cruisers. The Takao-class was better armored and equipped including the main artillery being modified to engage air targets. The Takao-class had a distinctive look thanks to the massive superstructure and the first chimney being inclined towards the second one which was set vertically. Only the lead ship of her class, i.e. Takao survived the war and was scrapped in 1946. The latest volume of the Super Drawings in 3D series harvests many years of Janusz Skulski's work who is considered the world's best Imperial Japanese Navy expert. Takao renders by Waldemar G ralski include the majority of adjustments made by Janusz Skulski and depict Takao in the camouflage pattern form the last days of the World War II.

This feature require that you enable JavaScript in your browser.
END_OF_DOCUMENT_TOKEN_TO_BE_REPLACED

This feature require that you enable JavaScript in your browser.
END_OF_DOCUMENT_TOKEN_TO_BE_REPLACED

This feature require that you enable JavaScript in your browser.
END_OF_DOCUMENT_TOKEN_TO_BE_REPLACED