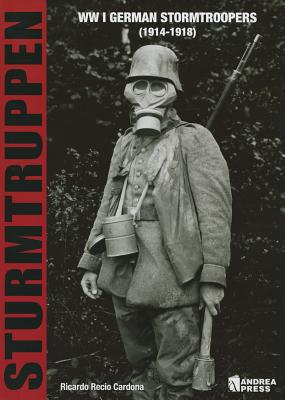 By Ricardo Recio Cardona
$49.95
Special Order - may be out of print

The first assault units (Sturmtruppen) were formed during the spring and summer of 1916, when the Sturmbataillon Rohr was organized and after General Falkenhayn, head of the OHL, gave orders for the creation of special detachments. These detachments had the mission of spreading the Stosstrupptaktik, a new tactic which decisively transformed the fighting methods of the German Army. But long before this happened, another type of troops had been created within the German infantry during the winter of 1914-1915: the Shock troops (Stosstruppen), fresh infantry groups that were never officially recognized as such and never belonged to any permanent unit, but remained active until the end of the war and contributed to improving the offensive capacity of the German infantry.This book is a narration of the history of the shock and assault troops and covers their combat methods. Finally, it offers a comprehensive description of their uniforms, equipment, and weapons, along with a large number of illustrations and period photographs rarely seen.REVIEWS "This eye opening tome delivers a comprehensive account of storm troopers' appearance, weaponry, tactics and history in time to commemorate the Great War centenary. This would be a great addition to the bookshelves of any military buff or toy soldier and model figure enthusiast.Toy Soldier and Model Figure.

This feature require that you enable JavaScript in your browser.
END_OF_DOCUMENT_TOKEN_TO_BE_REPLACED

This feature require that you enable JavaScript in your browser.
END_OF_DOCUMENT_TOKEN_TO_BE_REPLACED

This feature require that you enable JavaScript in your browser.
END_OF_DOCUMENT_TOKEN_TO_BE_REPLACED