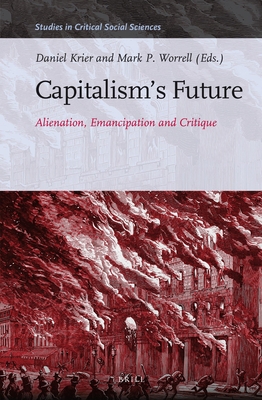 This is book number 85 in the Studies in Critical Social Sciences series.

Capitalisms' Future: Alienation, Emancipation and Critique frames 21st century economic and social possibilities in a dialogue between two forms of critical social theory: Marx's critique of political economy that analyzes capitalism and the critique of political psychology that analyzes authoritarianism. Contributions from social theorists in sociology, philosophy, and cultural studies are brought together to dissect and critique capitalist crises, left-liberalism, left-Thatcherism, resistance to risk-pooling, idealist philosophy, undemocratic social character, status wages and authoritarian spectacles. Throughout, Marx's centrality to critical social theory is confirmed, both alone and in in powerful combination with Adorno, Durkheim, Dubois, Lacan, Veblen, Weber and others. This book outlines conjoined critiques of commodity-fetishism and authority fetishism as the emancipatory agenda of 21st century critical theory.

Daniel Krier (Ph.D. University of Kansas) is an associate professor in the Department of Sociology at Iowa State University where he teaches sociological theory. He has published a book Speculative Management: Stock Market Power and Corporate Change (SUNY) and numerous articles on finance capital, political economy, critical theory and historical sociology.Mark P. Worrell (PhD University of Kansas) is Associate Professor of sociological theory at SUNY Cortland and has authored books on war, terror, and The Frankfurt School and the revolutionary potential of the American labor force during World War Two. Worrell has published widely in critical social theory journals including Telos, Rethinking Marxism, Fast Capitalism, Logos, and is currently an Associate Editor at the journal Critical Sociology.

This feature require that you enable JavaScript in your browser.
END_OF_DOCUMENT_TOKEN_TO_BE_REPLACED

This feature require that you enable JavaScript in your browser.
END_OF_DOCUMENT_TOKEN_TO_BE_REPLACED

This feature require that you enable JavaScript in your browser.
END_OF_DOCUMENT_TOKEN_TO_BE_REPLACED