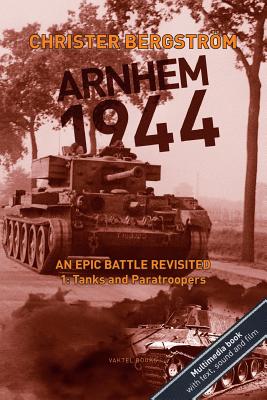 The indepth research made by the author has resulted in many myths and misconceptions being convincingly dispelled, backed up by detailed source notes. . In fact, these two volumes form a completely new image of the battle in the Netherlands in the autumn of 1944.

It was Cornelius Ryan who in 1974 put "Market Garden" so to say "on the map". However, it is obvious that he had no time to go through his vast collection of first-hand material on "Market Garden" before he so sadly passed away that same year. This is a mission that Christer Bergstr m has taken upon himself.

A torrent of new books about "Market Garden" has been published since 1974, and many of its authors - all included - have done meritorious work in producing new research. But it appears quite obvious that nobody has previously tried to go through The Cornelius Ryan Collection in its entirety in order to publish to the public the important pieces of the jigsaw puzzle that Ryan produced but was never able to use in his book. But now it has been done, for the first time, in this book by Christer Bergstr m.

Bergstr m has made a painstaking research work for several years, interviewing veterans and others who participated or witnessed the battle. He has gone through all relevant documents in all relevant archives in the UK, the USA, Germany and the Netherlands, and that material forms the basis of his book.

But even more so: Cross-referencing both sides' documents is absolutely crucial to form an opinion that is as close to the actual events as possible.

The major part of the archive material about the World War II in official collections has now been made accessible, but this has obviously not been enough - for several reasons. To begin with, we have the fact that the German side destroyed most of its remaining military documents at the end of the war. Even if Germany's Bundesarchiv has an impressive collection of documents from World War II at its disposal, it only constitutes a small part of the German military documents that were produced during the war. This is especially true for the last years of the war. In order to get as good an image as possible from the German side, I have during the last few decades had access to large quantities of first-hand material (documents from the war) from private collections - veterans, veterans' associations, collectors, etc.

This feature require that you enable JavaScript in your browser.
END_OF_DOCUMENT_TOKEN_TO_BE_REPLACED

This feature require that you enable JavaScript in your browser.
END_OF_DOCUMENT_TOKEN_TO_BE_REPLACED

This feature require that you enable JavaScript in your browser.
END_OF_DOCUMENT_TOKEN_TO_BE_REPLACED