Fluids in the Crust: Equilibrium and Transport Properties (Paperback) 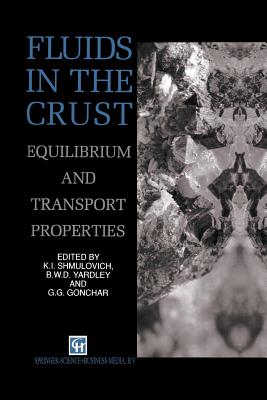 For much of the 20th century, scientific contacts between the Soviet Union and western countries were few and far between, and often super- ficial. In earth sciences, ideas and data were slow to cross the Iron Curtain, and there was considerable mutual mistrust of diverging scient- ific philosophies. In geochemistry, most western scientists were slow to appreciate the advances being made in the Soviet Union by os. Korz- hinskii, who put the study of ore genesis on a rigorous thermodynamic basis as early as the 1930s. Korzhinskii appreciated that the most fun- damental requirement for the application of quantitative models is data on mineral and fluid behaviour at the elevated pressures and temper- atures that occur in the Earth's crust. He began the work at the Institute of Experimental Mineralogy (IEM) in 1965, and it became a separate establishment of the Academy of Sciences in Chernogolovka in 1969. The aim was to initiate a major programme of high P-T experimental studies to apply physical chemistry and thermodynamics to resolving geological problems. For many years, Chernogolovka was a closed city, and western scient- ists were unable to visit the laboratories, but with the advent of peres- troika in 1989, the first groups of visitors were eagerly welcomed to the IEM. What they found was an experimental facility on a massive scale, with 300 staff, including 80 researchers and most of the rest pro- viding technical support.

This feature require that you enable JavaScript in your browser.
END_OF_DOCUMENT_TOKEN_TO_BE_REPLACED

This feature require that you enable JavaScript in your browser.
END_OF_DOCUMENT_TOKEN_TO_BE_REPLACED

This feature require that you enable JavaScript in your browser.
END_OF_DOCUMENT_TOKEN_TO_BE_REPLACED