Adventure of the Large Hadron Collider, The: From the Big Bang to the Higgs Boson (Hardcover) 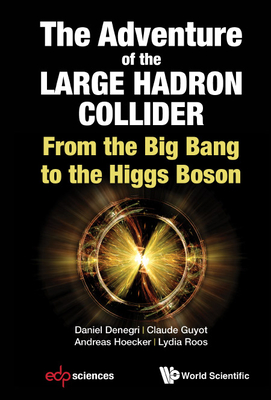 An introduction to the world of quarks and leptons, and of their interactions governed by fundamental symmetries of nature, as well as an introduction to the connection that exists between worlds of the infinitesimally small and the infinitely large.The book begins with a simple presentation of the theoretical framework, the so-called Standard Model, which evolved gradually since the 1960s. The key experiments establishing it as the theory of elementary particle physics, but also its missing pieces and conceptual weaknesses are introduced. The book proceeds with the extraordinary story of the Large Hadron Collider at CERN -- the largest purely scientific project ever realized. Conception, design and construction by worldwide collaborations of the detectors of size and complexity without precedent in scientific history are discussed. The book then offers the reader a state-of-the art (2020) appreciation of the depth and breadth of the physics exploration performed by the LHC experiments: the study of new forms of matter, the understanding of symmetry-breaking phenomena at the fundamental level, the exciting searches for new physics such as dark matter, additional space dimensions, new symmetries, and more. The adventure of the LHC culminated in the discovery of the Higgs boson in 2012 (Nobel Prize in Physics in 2013). The last chapter of this book describes the plans for the LHC during the next 15 years of exploitation and improvement, and the possible evolution of the field and future collider projects under consideration.The authors are researchers from CERN, CEA and CNRS (France), and deeply engaged in the LHC program: D Denegri in the CMS experiment, C Guyot, A Hoecker and L Roos in the ATLAS experiment. Some of them are involved since the inception of the project. They give a lively and accessible inside view of this amazing scientific and human adventure.

This feature require that you enable JavaScript in your browser.
END_OF_DOCUMENT_TOKEN_TO_BE_REPLACED

This feature require that you enable JavaScript in your browser.
END_OF_DOCUMENT_TOKEN_TO_BE_REPLACED

This feature require that you enable JavaScript in your browser.
END_OF_DOCUMENT_TOKEN_TO_BE_REPLACED