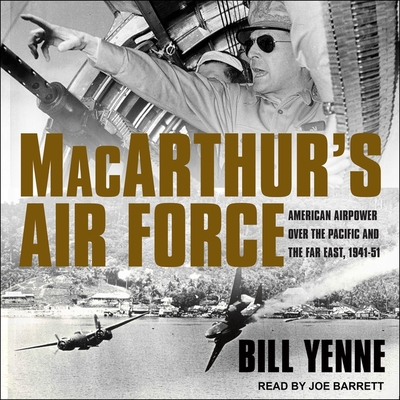 General Douglas MacArthur is one of the towering figures of World War II, and indeed of the twentieth century, but his leadership of the second largest air force in the USAAF is often overlooked. When World War II ended, the three numbered air forces (the Fifth, Thirteenth and Seventh) under his command possessed 4,004 combat aircraft, 433 reconnaissance aircraft and 922 transports. After being humbled by the Japanese in the Philippines in 1942, MacArthur and his air chief General George Kenney rebuilt the U.S. aerial presence in the Pacific, helping Allied naval and ground forces to push back the Japanese Air Force, re-take the Philippines, and carry the war north towards the Home Islands. Following the end of World War II MacArthur was the highest military and political authority in Japan, and at the outbreak of the Korean War in June 1950 he was named as Commander in Chief, United Nations Command. In the ten months of his command his Far East Air Forces increased dramatically and saw the first aerial combat between jet fighters. Written by award-winning aviation historian Bill Yenne, this engrossing book traces the journey of American air forces in the Pacific under General MacArthur's command, from their lowly beginnings to their eventual triumph over Imperial Japan, followed by their entry into the jet age in the skies over Korea.

This feature require that you enable JavaScript in your browser.
END_OF_DOCUMENT_TOKEN_TO_BE_REPLACED

This feature require that you enable JavaScript in your browser.
END_OF_DOCUMENT_TOKEN_TO_BE_REPLACED

This feature require that you enable JavaScript in your browser.
END_OF_DOCUMENT_TOKEN_TO_BE_REPLACED