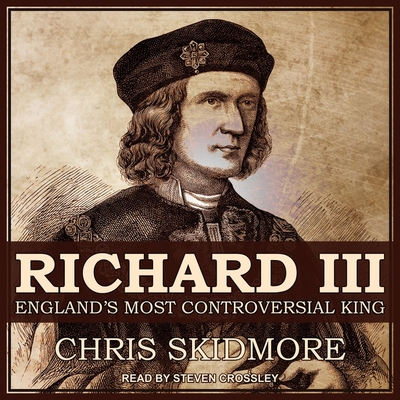 By Steven Crossley (Read by), Chris Skidmore
$24.99
Special Order - may be out of print

From acclaimed historian Chris Skidmore comes the authoritative biography of Richard III, England's most controversial king, a man alternately praised as a saint and cursed as a villain. Richard III is one of English history's best known and least understood monarchs. Immortalized by Shakespeare as a hunchbacked murderer, the discovery in 2012 of his skeleton in a Leicester parking lot re-ignited debate over the true character of England's most controversial king. Richard was born into an age of brutality, when civil war gripped the land and the Yorkist dynasty clung to the crown with their fingertips. Was he really a power-crazed monster who killed his nephews, or the victim of the first political smear campaign conducted by the Tudors? In the first full biography of Richard III for fifty years, Chris Skidmore draws on new manuscript evidence to reassess Richard's life and times. Richard III examines in intense detail Richard's inner nature and his complex relations with those around him to unravel the mystery of the last English monarch to die on the battlefield.

This feature require that you enable JavaScript in your browser.
END_OF_DOCUMENT_TOKEN_TO_BE_REPLACED

This feature require that you enable JavaScript in your browser.
END_OF_DOCUMENT_TOKEN_TO_BE_REPLACED

This feature require that you enable JavaScript in your browser.
END_OF_DOCUMENT_TOKEN_TO_BE_REPLACED