The Oracle of Maracoor (MP3 CD) 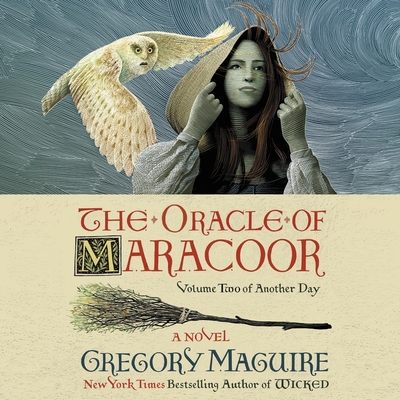 Multimillion-copy bestselling author Gregory Maguire brings us the enchanting second novel in the series Another Day, returning to the world he first created in Wicked. The Oracle of Maracoor, the second in the trilogy called Another Day, continues the story of Elphaba's green-skinned granddaughter, Rain. That strange land, Maracoor--across the ocean from Oz--is beset by an invading army. In the mayhem, Rain and Cossy, a child felon, break out of prison. Helped by a few flying monkeys, they struggle to escape the city before it falls under siege. Their arresting officer, Lucikles, also retreats with his family to a highland redoubt. But safety eludes them all. Chaos thunders upon them in the form of warriors, refugees, and brigands. The very fabric of reality loosens, liberating creatures of myth and legend--huge blue wolves, harpies, and giants made of the very landscape.

Cued in by secrets known only to the most highly placed members of the royal court, Rain and her companions hunt the fabled Oracle of Maracoor for guidance and soothsaying. Rain has to recover her forgotten past if she is to consider returning home. Cossy, the ten-year-old convicted of murder, must become invisible to avoid being taken into custody again. Meanwhile, the Fist of Mara, an arcane artifact that renders all around it barren, hammers against human lives. If the reclusive Oracle should spin a prophecy, might the desperate wicked years promise another day, one less perilous?

This feature require that you enable JavaScript in your browser.
END_OF_DOCUMENT_TOKEN_TO_BE_REPLACED

This feature require that you enable JavaScript in your browser.
END_OF_DOCUMENT_TOKEN_TO_BE_REPLACED

This feature require that you enable JavaScript in your browser.
END_OF_DOCUMENT_TOKEN_TO_BE_REPLACED