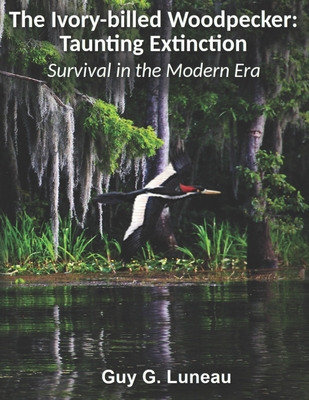 The ivorybill was considered by many to have gone extinct on the North American continent as far back as the early 1900's. Yet it was "rediscovered". After a short while, many lost hope and again labeled it extinct. It was rediscovered again. Sightings of the species continued on through the decades. And encounters continue up into the present day, two-plus decades into the 21st century.

How can this be? How can a large bird species, as large as a Wood Duck, continue surviving on the North American continent while living its life "under the radar" of the 330 million people residing in the USA in the 2020 A.D. time frame? This book, The Ivory-billed Woodpecker: Taunting Extinction, offers explanations of the various pathways by which this can occur -- and indeed it has occurred.

The modern-day Ivory-billed Woodpecker population is no doubt low in number. But forest square mileage is much larger today, and the average age of the trees in those forests is much older today, in the eastern USA than it was in the mid 1900's when numerous species of forest animals' populations dipped to substantially reduced numbers, including such now-abundant animals as Whitetail Deer, Wild Turkey, Wood Duck, and Black Bear to name a few. Combining the ivorybill's low, but likely increasing, population with it being a quiet, skittish-of-man, retiring, long-distance-traveling, masterfully-wily, master-of-its-environment bird species, along with a modern-day humanity who largely does not spend much time in deep forest and swamp habitats, we then have the factors of the recipe - the equation - that permits the ivorybill to elude detection by humans.

This feature require that you enable JavaScript in your browser.
END_OF_DOCUMENT_TOKEN_TO_BE_REPLACED

This feature require that you enable JavaScript in your browser.
END_OF_DOCUMENT_TOKEN_TO_BE_REPLACED

This feature require that you enable JavaScript in your browser.
END_OF_DOCUMENT_TOKEN_TO_BE_REPLACED