A Week on the Concord and Merrimack Rivers: Original (Paperback) 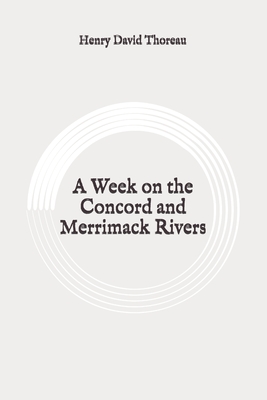 Based on a trip with his brother in 1839, A Week on the Concord and Merrimack Rivers is an excellent example of Thoreau's talent for naturalistic writing. In exquisite detail Thoreau depicts the nature that surrounds him over the course of his trip. One of only two books to be published during his lifetime, Thoreau began work on the novel following his brother's death in 1842, however the work was not fully completed and published until 1849. A failure when first published, it has since been recognized as one of Thoreau's great naturalist works.The Musketaquid, or Grass-ground River, though probably as old as the Nile or Euphrates, did not begin to have a place in civilized history, until the fame of its grassy meadows and its fish attracted settlers out of England in 1635, when it received the other but kindred name of Concord from the first plantation on its banks, which appears to have been commenced in a spirit of peace and harmony. It will be Grass-ground River as long as grass grows and water runs here; it will be Concord River only while men lead peaceable lives on its banks. To an extinct race it was grass-ground, where they hunted and fished, and it is still perennial grass-ground to Concord farmers, who own the Great Meadows, and get the hay from year to year. "One branch of it," according to the historian of Concord, for I love to quote so good authority, "rises in the south part of Hopkinton, and another from a pond and a large cedar-swamp in Westborough," and flowing between Hopkinton and Southborough, through Framingham, and between Sudbury and Wayland, where it is sometimes called Sudbury River, it enters Concord at the south part of the town, and after receiving the North or Assabeth River, which has its source a little farther to the north and west, goes out at the northeast angle, and flowing between Bedford and Carlisle, and through Billerica, empties into the Merrimack at Lowell. In Concord it is, in summer, from four to fifteen feet deep, and from one hundred to three hundred feet wide, but in the spring freshets, when it overflows its banks, it is in some places nearly a mile wide. Between Sudbury and Wayland the meadows acquire their greatest breadth, and when covered with water, they form a handsome chain of shallow vernal lakes, resorted to by numerous gulls and ducks. Just above Sherman's Bridge, between these towns, is the largest expanse, and when the wind blows freshly in a raw March day, heaving up the surface into dark and sober billows or regular swells, skirted as it is in the distance with alder-swamps and smoke-like maples, it looks like a smaller Lake Huron, and is very pleasant and exciting for a landsman to row or sail over. The farm-houses along the Sudbury shore, which rises gently to a considerable height, command fine water prospects at this season. The shore is more flat on the Wayland side, and this town is the greatest loser by the flood. Its farmers tell me that thousands of acres are flooded now, since the dams have been erected, where they remember to have seen the white honeysuckle or clover growing once, and they could go dry with shoes only in summer. Now there is nothing but blue-joint and sedge and cut-grass there, standing in water all the year round. For a long time, they made the most of the driest season to get their hay, working sometimes till nine o'clock at night, sedulously paring with their scythes in the twilight round the hummocks left by the ice; but now it is not worth the getting when they can come at it, and they look sadly round to their wood-lots and upland as a last resource.