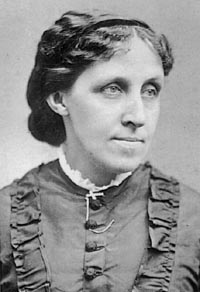 "Poor dull Concord. Nothing colorful has come through here since the Redcoats."
-Louisa May Alcott

Born in Germantown, PA, on November 29, 1832, the most famous daughter of transcendentalist (and Emerson friend) Amos Bronson Alcott moved to Concord in 1840. The young Alcott liked to produce her plays with the help of her sisters and take nature walks with fellow Concordian Henry David Thoreau. (See Louisa May and Mr. Thoreau's Flute, in the list of books below.) Wishing to instill a greater love of nature in his girls and to live the precepts of fundamentalism, Bronson Alcott moved the family to Fruitlands (www.fruitlands.org), a utopian community in neighboring Harvard, MA, in 1843. They returned to Concord two years later after enduring great privation and hardship in the unsuccessful community.

Life in Concord was not much easier, so the family moved again-this time to Boston-in 1849. At the tender age of seventeen, Alcott took on the responsibility for easing the family's financial burdens. She sought out the limited jobs available to a young girl of the time, caring for the elderly, doing laundry, and teaching small children. Meanwhile, she was busy writing, and in 1851 published a poem in a magazine under a pseudonym, launching her literary career. Her first book, Flower Fables, a collection of fairy-tales and poems that she had originally written to entertain Emerson's daughter, followed in 1854. 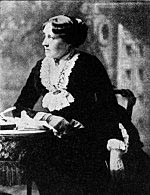 When Bronson moved the family back to Concord in 1856, purchasing Orchard House (www.louisamayalcott.org) for them, Alcott lingered in Boston to advance her writing career, but she was forced to rejoin the family a year later following her younger sister's death from scarlet fever and her older sister's marriage, events she would eventually incorporate in the autobiographical Little Women.

At age 30, Alcott went to Washington, DC, to serve as a nurse tending wounded Civil War soldiers. Her second book, Hospital Sketches soon followed. Little Women made its debut in 1868 as the first volume of a two-volume novel, the second, Good Wives, appearing a year later. During the next twenty years, she would publish an astonishing array of poetry books, Gothic thrillers (see A Long Fatal Love Chase, below), children's stories, and novels. In addition to being a prolific writer, she also was an ardent suffragist (the first woman to vote in Concord), an avid abolitionist, and a social and educational reformer.

During her stint as a Civil War nurse in 1862, Alcott had contracted typhoid fever. The popular treatment for fever at the time was quinine and calomel, or mercury chloride, a mineral that cured the disease but eventually killed the patient. In 1888, at age 56, Alcott succumbed to the long-term effects of mercury poisoning and died, leaving behind a legacy of classics that have endured the test of time.

By Louisa May Alcott, Susan Cheever (Introduction by)
$11.00

Behind a Mask: The Unknown Thrillers Of Louisa May Alcott (Paperback)

By Louisa May Alcott, Regina Barreca (Introduction by), Susan Straight (Afterword by)
$5.95

By Louisa May Alcott, J. Courtney Sullivan (Foreword by), Shreya Gupta (Drawings by)
$26.00

By Louisa May Alcott, Anna South (Introduction by)
$14.99

By Louisa May Alcott, J.T. Barbarese, John Matteson (Introduction by)
$5.95

Louisa May Alcott: The Woman Behind Little Women (Paperback)

Louisa May Alcott: Her Life, Letters, and Journals (Paperback)

Under the Lilacs (Paperback)

Louisa on the Front Lines: Louisa May Alcott in the Civil War (Hardcover)

This feature require that you enable JavaScript in your browser.
END_OF_DOCUMENT_TOKEN_TO_BE_REPLACED

This feature require that you enable JavaScript in your browser.
END_OF_DOCUMENT_TOKEN_TO_BE_REPLACED

This feature require that you enable JavaScript in your browser.
END_OF_DOCUMENT_TOKEN_TO_BE_REPLACED